Adoptive T cell therapy has brought excitement to immuno-oncology research and hope to cancer patients who are out of treatment options. The most popular form of T cell for therapy are chimeric antigen receptor (CAR) T cells. These cells are engineered to express a synthetic transmembrane receptors containing the variable domain of an antibody to redirect their specificity to recognize and eliminate cancer cells upon infusion in patients.

Below is a collection of scientific resources for your T cell therapy research. 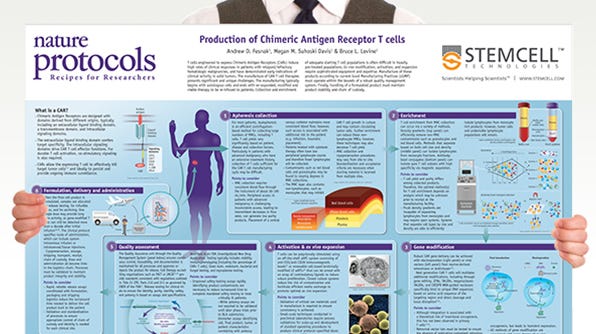 Scientists first began to experiment with chimeric antigen receptor (CAR) T cells in the late 1980’s, when a trio of researchers genetically engineered T cells to express an antibody recognizing a hapten and redirecting their specificity.1,2 The authors of this study were the first to suggest the use of chimeric T cell receptors in combating tumors. Years later, in 2011, Carl June and colleagues reported a case study where a chronic lymphoid leukemia (CLL) patient treated with autologous anti-CD19 CAR T cells (CART19) showed a complete response.3 This finding fueled the fire in immuno-oncology research, and CAR T cell immunotherapy has since brought new hope to many leukemia patients who are seemingly out of treatment options.

Prior to being used as therapy in the clinic, CAR T cells are developed and manufactured on the bench. Primary human T cells isolated from the patients are activated, expanded and genetically modified to express CARs recognizing the selected antigen ex vivo. Many factors are taken to consideration at this stage, including target selection and method of genetic modification.

CARs are synthetic transmembrane receptors containing the extracellular scFv domain of an antibody, which confers antigen specificity, and intracellular components that typically include CD3ζ and co-stimulatory (ex. CD28, 4-1BB, OX-40) signaling domains to mimic T cell signalling (Figure 1).4,5 Upon antigen recognition, CAR T cells are activated and initiate their effector functions such as cytokine production and cytotoxicity, which ultimately result in the elimination of any cells expressing target antigen. As tumor antigens are typically also expressed on non-malignant cells, target selection poses a challenge in CAR T cell design.

Adapted from the Production of CAR T Cell wallchart, produced by Nature Protocols and supported by STEMCELL Technologies.

The most basic of CAR T cells target a single tumor-specific antigen for blood cancer therapy. Examples include engineered T cells targeting CD19, which is expressed on B cell lymphomas and lymphocytic leukemias,6,7,8 and CD123 (IL3RA), which is overexpressed in acute myeloid leukemia (AML) and other hematologic malignancies.9,10

Researchers are now beginning to explore the use of CAR T cell therapy for solid tumors, including hepatocellular carcinoma (HCC, liver cancer).11,12 A large proportion of tumor-specific antigens are intracellular or secreted, and thus are largely considered “undruggable” by antibody therapy. On the basis that all secreted proteins are processed into peptides and presented on cell surface by MHC I, Liu et al. sought to develop CAR T cells targeting a secreted HCC-specific secreted antigen, alpha-fetoprotein (AFP). The result of their work is a CAR T cell targeting AFP peptide complexed with MHC I that can specifically lyse HCC cells while sparing others.

Rather than specificity, few studies have suggested an alternative approach to broadly target multiple tumors at the same time. One particular research group developed CAR T cells expressing natural cytotoxic receptor 1 (NCR1), a receptor naturally expressed on natural killer (NK) cells that partly mediates recognition of a broad range of tumor cells, including carcinomas, neuroblastomas and leukemias. The precise identification of tumor-associated ligands that are recognized by NCR1 remains a challenge. Tal et al. have developed CAR T cells that express the extracellular domain of NCR1, resulting in genetically modified T cells that can recognize a diverse range of tumors.

The challenge in target selection remains that such tumor-specific antigens are uncommon, and thus CAR T cell activation in bystander tissues can occur. As a result, researchers are exploring ways to increase the specificity of CAR T cells by using combinations of target antigens. Roybal et al. developed a dual receptor system, where antigen A is required to induce the expression of CAR, and antigen B is required for the activation of CAR T cells. As a result, these engineered T cells are activated only when both antigens are present in a localized environment. This novel system not only improves the precision of tumor targeting by CAR T cells, but also expands the potential for CAR T cell use with the more common tumor-associated antigens rather than tumor-specific antigens.

Cancer immunotherapy for solid tumors generally aims to boost specific, local immune responses in the tumor microenvironment as described in the study above. Recently, an article published in Cell by the Engleman lab turned this concept upside down. Using organism-wide analysis and mass cytometry, Spitzer et al found that systemic immunity is in fact required for effective immunotherapy leading to tumor rejection. A subset of peripheral CD4+ T cells was particularly found to be the cell type responsible for the anti-tumor immunity in response to immunotherapy.

T cells are redirected to a particular target by genetically modifying them to express CARs. Currently, the most common method to genetically modify T cells is using viral (ex. gammaretroviral or lentiviral) vectors that has been engineered to carry the CAR construct.16 In short, T cells are activated and then transduced with virus particles that release their cargo into the cell, leading to insertion of the CAR construct in the genome of transduced T cells (Figure 2). Li et al recently published a full protocol on gammaretroviral production and T cell transduction17 using T cells isolated with EasySep™. 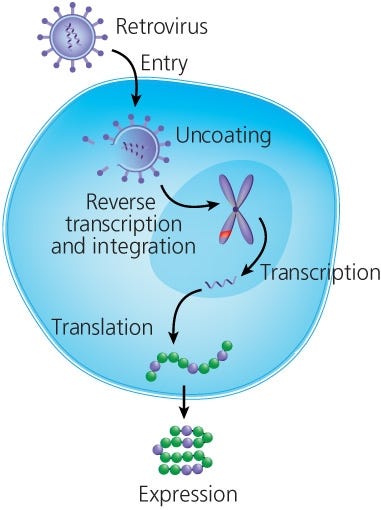 Adapted from the Production of CAR T Cell wallchart, produced by Nature Protocols and supported by STEMCELL Technologies.

There are a number of variables that accompany genetic modification. In this study, the authors showed that different vectors and transposons can have varying biases for genomic insertion sites, which can influence the risk of insertional mutagenesis. MLV retrovirus and piggyBac transposon in particular prefer to integrate at transcriptional start sites. In addition to vector selection, other variables such as that timing of transduction have been shown to impact the quality of the final cell therapy product.19

Although viral transduction remains the most efficient method of genetically engineering human T cells, there are viral-free methods that are currently being explored, including CRISPR/Cas9, TALENs and megaTAL nucleases.20,21,22 In this particular article, the Blazar lab showed that megaTAL and CRISPR/Cas9 can be used to disrupt endogenous T cell receptor in primary human T cells for the generation of CAR T cells. These methods need to be further optimized to be considered efficient alternatives for CAR T cell production.

The production of CAR T cells conventionally involves complex and time-consuming ex vivo procedures. This study describes a method to quickly introduce leukaemia-targeting CAR genes directly into circulating host T cells. Smith et al. designed CD3-targeted nanoparticles that can be taken up by T cells and deliver DNA into their nuclei, resulting in the ability to genetically modify T cells in situ without having to manipulate them ex vivo. With further optimization and safety assessment, this technology may present an efficient and cost-effective method to generate anti-tumor CAR T cells.

Cutting edge research on the bench continually proposes new and exciting concepts in CAR T cell design. Of particular interest is delivery: how to efficiently deliver T cells into tumors, and what engineered T cells can deliver to tumors in vivo.

In this article, Stephan et al. described a method to improve the delivery of T cells to solid tumors in vivo using bioengineered polymer matrices. When implanted near solid tumors or at resection sites, biopolymer implants are capable of delivering and expanding tumor-specific T cells. This mode of delivery results in significant enhancement of tumor regression for inoperable tumors and prevention of relapse after surgery compared to conventional injections. A follow-up study published by the same lab in 2017 reported that this technology can be used to locally co-deliver stimulator of IFN genes (STING) agonists along with the adoptively transferred T cells25. This co-delivery allows for the activation of immune responses against tumor cells that are not recognized by the adoptively transferred T cells.

In this study, Roybal et al. used synthetic Notch receptors to engineer T cells that can deliver any therapeutic payloads in response to a given antigen in vivo. Upon ligand binding, the synthetic Notch receptor initiates a transcriptional program leading to the expression of a chosen factor such as secreted cytokines (ex. IL-12), cytotoxic agents (ex. TRAIL), adjuvants (ex. flagellin), transcription factors (ex. Tbet) and therapeutic antibodies (ex. anti-PD-1). This finding allows scientists to dictate the effector response of engineered T cells in vivo, which can be customized depending on the state of the patient.


These new concepts can be applied to improve therapeutic efficacy, but some may also increase the cost of therapy. With the already exorbitant cost of T cell therapy, clinical trials will be needed to determine whether any benefits of translating these novel concepts from bench to bedside are significant enough.

Stay up to date on the latest publications by subscribing to Cell Therapy News and Human Immunology News. 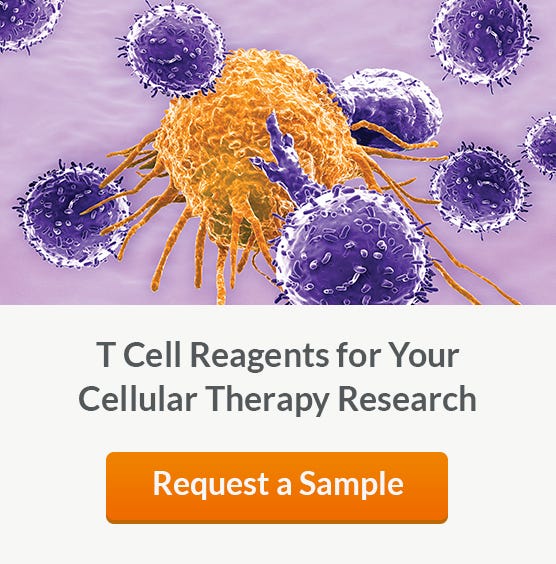