In 2003, the role of FOXP3 in regulatory T cells (Tregs) was described as a ‘master transcription factor’. Since then, the number of research studies focusing on the immunosuppressive nature of Tregs has significantly grown. FOXP3 remains the most reliable marker of Tregs to date, and the importance of Tregs in maintaining immune tolerance continues to be highlighted. 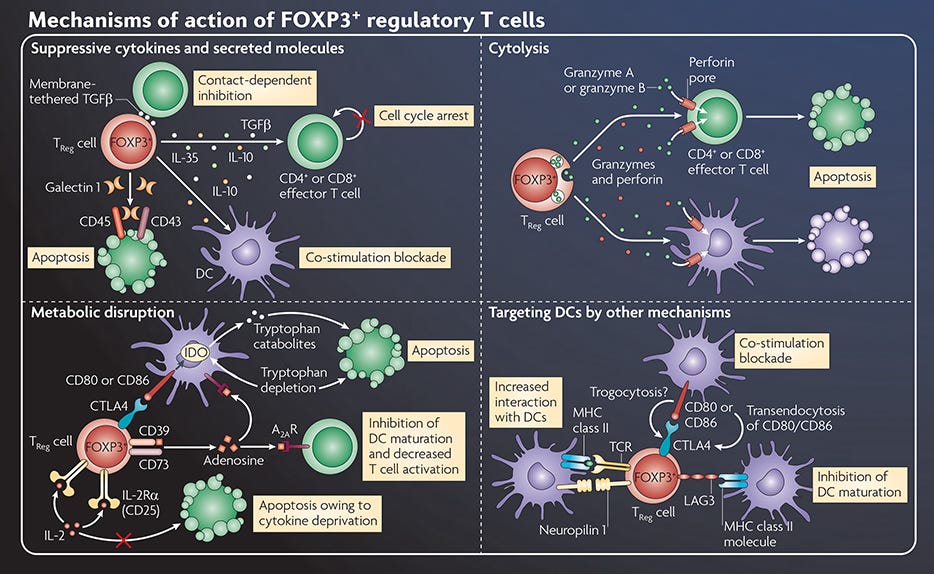 Self-peptides have different expression patterns in the thymus compared to the rest of the body. For example, tissue-restricted peptides may only be sparsely expressed in the thymus. How thymic self-peptide expression patterns can dictate these mechanisms of tolerance had previously been unclear. In this article, the Jenkins lab reported that T cells specific for peptides expressed uniformly in the thymus undergo deletion, whereas T cells recognizing nuclear and cytosolic proteins that are only expressed outside the thymus are retained in a state of ignorance. On the other hand, tissue-restricted peptides with limited thymic expression induced partial clonal deletion but enhanced Treg development among the remaining cells. Overall, this study shows that CD4+ T cells tolerate self peptides with different expression patterns via distinct mechanisms.

For reasons that are not yet clear, the complete maturation of T cells requires a post-thymic maturation period of approximately three weeks in the periphery5. Recent thymic emigrants (RTEs) differ in TCR repertoire, proliferative responses and immunocompetence compared to mature naïve T cells. In this article, the Fink lab reported that RTEs are also more susceptible to suppression by Tregs and to anergy upon exposure to tissue-restricted antigens in the absence of inflammation, resulting in reduced proliferation and cytokine production. The authors suggest that these mechanisms may play a role in tolerance induction during post-thymic maturation; however, in the presence of inflammation, tolerance-prone RTEs retain the ability to convert into fully competent effector T cells.

Autoimmune regulator (Aire) is known as a transcription factor that promotes the expression of tissue-specific antigens in medullary thymic epithelial cells (mTECs). The expression of Aire in the thymus is critical for both central tolerance by clonal deletion, and for peripheral tolerance via the generation of Tregs7. Interestingly, Aire expression can also be found in extrathymic Aire-expressing cells (eTACs) in peripheral lymphoid organs. In this paper, Gardner et al. described that eTACs are a subset of antigen-presenting cells that can directly inactivate effector T cells independently of Tregs. Hence, eTACs represent another mechanism of peripheral tolerance against autoimmunity.

Tregs are a key component of peripheral tolerance, whose role is to limit inflammation in order to prevent autoimmune and inflammatory diseases, including colitis and Crohn’s disease in the intestine. The gut is colonized with trillions of harmless commensal bacteria, collectively called the microbiota, and Tregs are critical in suppressing unnecessary immune responses against them. Interestingly, microbiota-derived signals are required for the development of intestinal Tregs. In this article, Smith et al. reported that short-chain fatty acids (SCFAs) produced by bacterial fermentation, such as propionate, acetate and butyrate, promote the generation of colonic Tregs. Furthermore, the oral administration of SCFAs can ameliorate colitis in a Treg-dependent manner in mice, emphasizing the importance of microbiota in maintaining immune tolerance in the gut.

Tregs are not the only immunoregulatory subset of immune cells. Here, work from the Gordon lab described DC-SIGN+ macrophages as a subset of tolerogenic innate immune cells that secrete the anti-inflammatory cytokine IL-10 to suppress CD8+ T cells and promote Treg expansion. Conde et al. demonstrated that these regulatory macrophages accumulate during tolerance induction, specifically in the context of CD40L blockade in a mouse model of cardiac transplantation.

Since the role of FOXP3 in Tregs was first discovered in 200310, researchers have been working to develop Tregs as a cellular therapy to restore immune tolerance in autoimmune and inflammatory diseases, such as diabetes11. Ongoing clinical trials to test this form of therapy will reveal whether cellular therapy is an effective approach to restore immune tolerance in patients.


Resources for Your Immune Tolerance Research