The liver is a vital organ involved in a wide range of processes such as detoxification, protein synthesis, metabolism, and hormone production. Despite an astounding regenerative capacity in vivo, expansion of liver cells in vitro has remained a challenge. Growth of the hepatic epithelium as organoids provides researchers with a stable population of liver cells for research in a variety of fields including liver biology, disease modeling and toxicity screening.

Explore the resources below for information on the expansion and maintenance of hepatic epithelial cells as organoids. 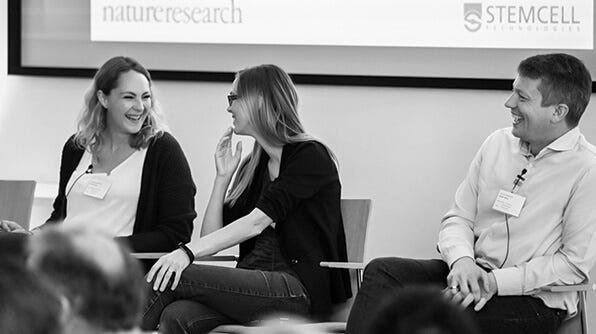 Hepatic organoids are functional three-dimensional (3D) in vitro models of the liver and serve as a novel platform to address diverse research questions pertinent to hepatic development and regeneration, detoxification and metabolism studies, liver disease modelling, and adult stem cell biology. Hepatic organoids consist of a spherical monolayer epithelium, preserve key physiological features of the liver and are obtained through isolation and expansion of stem and progenitor cells from hepatic stem cell niches.

By presenting an in vitro system that closely mimics an in vivo environment, hepatic organoids are enabling scientists to investigate their specific research questions in a physiologically relevant context.

The liver is the largest solid organ in the human body and the major site for cellular metabolism, including serum protein secretion, hormone synthesis, bile production, glycogen storage and detoxification. To account for this variety in exocrine and endocrine functions, the liver is composed of two types of parenchymal cells, hepatocytes and bile duct cells (cholangiocytes), as well as multiple non-parenchymal cell types (Kupffer, stromal, stellate and endothelial cells).1 During embryonic development, hepatocytes and bile duct cells share a common bipotential progenitor (hepatoblast) that is derived from hepatic endoderm and gives rise to both parenchymal cell types.2 In tightly-regulated synergy, the different liver-resident cell types are arranged to form the hepatic vasculature, biliary tree, and epithelial sheets of hepatocytes that are organized into hepatic lobules, the functional and structural units of the liver.1 The epithelial hepatocyte sheets are in contact with the endothelial sinusoids through which hepatic arteriole and portal vein blood flows towards the central vein.3 Through their apical membrane, hepatocytes take up nutrients absorbed in the small intestine for storage, harmful components for detoxification, and secrete bile via their basal membrane into bile canaliculi that drain into the bile duct and subsequently into the gallbladder or duodenum.4 The bile duct is lined with bile duct cells and forms another vessel of the portal triad alongside the portal vein, hepatic artery, lymphatic vessels and vagus nerve branch.1

While the stem cell niche in epithelial organs such as the intestine is highly defined, there is an ongoing debate in the liver research field about the source and contribution of stem cells, progenitor cells and mature cell types in the context of liver homeostasis and regeneration upon injury.5–7 Proliferative cells, localized in the periportal and pericentral regions, respond to different forms of liver injury (i.e. acute versus chronic).8 Besides the differentiation of “classical" stem cells or progenitors within the hepatic lineage to functional liver cells, it has also been postulated that existing, mature parenchymal cells contribute to tissue turnover.9

In tissue homeostasis, the liver has a slower turnover rate than other epithelial organs; the life-expectancy of a mature hepatocyte has been dated to 201 days.10 Homeostatic self-renewal and maintenance of hepatic function has recently been attributed to proliferative Axin2+ cells found in close proximity to the central vein within the liver lobule.11 Expression of Tbx3 in this cell type suggests the retention of an embryonic hepatocyte progenitor and demonstrates the presence of a heterogeneous and dynamic population of mature hepatocytes and hepatic progenitors within the adult liver. Fueled by Wnt signaling factors from neighbouring endothelial cells, these hepatic progenitors are maintained within the pericentral niche and give rise to progeny hepatocytes (but not cholangiocytes) that can reconstitute 40% of hepatocytes within the hepatic lobule.11 Other studies have localized a self-renewing hepatocyte progenitor population to the periportal region of the hepatic lobe, suggesting a secondary source for hepatic regeneration under normal conditions.12,13 These cells are proposed to gradually stream from the portal space toward the hepatic vein while undergoing different states of maturity and function during their journey. Additionally, Furuyama and colleagues have reported self-renewing Sox9-expressing progenitors in the biliary ductal epithelium as the principal source of cell replacement.14 Sox9 cell-derived hepatocytes were found to also travel from the periportal space to the central vein. Furthermore, derivatives of the Sox9 progenitors were localized to the extrahepatic bile duct tree, suggesting bipotent behavior of these progenitors. In contrast, others were able to attribute solely mature hepatocytes to liver homeostasis.15

The liver is well-adapted to respond to specific injury stimuli with fine-tuned responses of regeneration. As such, the surgical removal of a majority of the liver (partial hepatectomy) results in restoration of hepatic mass and function within a week.16 This suggests mitotic behavior of all cell populations in the periportal zone, including hepatocytes and bile duct cells, and this proliferation is believed to be activated in response to hepatic mitogens such as NFκB, STAT3, Jun and Fos. The responsiveness of hepatocytes and bile duct cells to readily divide in specific circumstances has dispelled the myth that hepatic parenchymal cells are terminally differentiated. However, in fibrotic and cirrhotic injury responses that impair the proliferative capacity of mature liver cell types, facultative stem cells of the liver may be activated to generate intermediate, duct-like “oval cells" that can subsequently restore function and liver mass.17 Lineage-tracing experiments have mapped this regeneration potential to the canal of Hering in the periportal regions of hepatic lobules.18 While coined “oval cell proliferation" in rodent models, this response is known as “ductular reaction" in human.19 Furthermore, progenitors expressing the transcription factor Sox9 are not only involved in tissue homeostasis, but have also been shown to contribute to the restoration of hepatic mass and function upon partial hepatectomy and acute liver injury (e.g. via CCl4 administration).14

While Lgr5 stem cell marker-expression is generally not detected in the adult wild type liver, injury triggers the activation of an epithelial Lgr5+ epithelial progenitor cell population.20 Isolation of single Lgr5+ cells from the adult mouse liver and their growth into hepatic organoids has demonstrated their clonogenic potential and the long-term culture of these organoids has confirmed their indefinite capacity for self-renewal.20 Cells maintain their differentiation potential and exhibit karyotype stability. For human cultures, Epcam+ bile duct-derived bipotent progenitors were isolated for expansion into human hepatic organoids.21

Liver organoids differ from intestinal organoids in their limitation to undergo spontaneous differentiation during maintenance and expansion. Protocols for the propagation of liver organoids therefore rely on culture conditions for the establishment and expansion of hepatic organoids, followed by a second culture environment that removes proliferative signals, inhibits ductal lineage commitment and induces differentiation towards hepatocyte-like cells.20 Current differentiation protocols yield organoids of which 30-50% fulfill hepatic characteristics.22 These hepatic organoids resemble primary hepatocytes but lack the complete functional repertoire of this target cell type, a drawback shared by the hPSC-to-hepatocyte differentiation field. During expansion conditions, hepatic organoids express a ductal phenotype, characterized by the expression of Krt19. However, upon differentiation, hepatic organoids downregulate ductal markers and exhibit albumin secretion, CYP3A activity, LDL uptake and glycogen storage. Transplantation of differentiated hepatic organoids into mouse models of liver failure have shown engraftment and repopulation of the damaged liver, resulting in partial rescue of the murine liver function.20 Equivalent human liver organoids engrafted into mice with acute liver damage resulted in human albumin and alpha-1-antitrypin synthesis that resembled levels of secretions seen from transplants using primary human hepatocytes within one month.21 Furthermore, the disease pathogenesis of alpha-1-antitrypsin deficiency and Alagille syndrome were confirmed in human liver organoids derived from patient biopsies, showing proof-of-principle that diseased tissue can be cultured in 3D ex vivo, differentiated and utilized for disease modeling.21

3D liver tissue has also been engineered by using using human induced pluripotent stem cells (hiPSCs) to derive hepatocytes in co-culture with mesenchymal and endothelial cells.25 Mimicking organogenesis, cells self-organized into liver buds and when transplanted into mice, liver buds were vascularized and matured to synthesize serum proteins and carry out detoxifying functions. In a mouse model of liver failure, transplanted liver buds were able to restore partial hepatic function and rescue affected mice. In efforts toward clinical applications, current research aims to design liver buds suitable for hepatic delivery via the portal vein of patients in need of a liver transplant.26

One drawback of hIPSCs or trans-differentiated cells in the design of clinical solutions is their exposure to genetic modifications through reprogramming factors. While these cells commonly exhibit genomic instability, particularly in long-term cultures, adult stem cells directly derived from hepatic tissue circumvent this caveat.29

An improved understanding of hepatic regenerative pathways and the development of in vitro systems to mimic both the expansion and differentiation of hepatocytes, will pave the way towards autologous cell therapy and transplantation.30 The derivation of hepatic organoids from patients with inherited liver disease also opens the opportunity to establish drug-screening platforms and toxicity assays for personalized medicine while allowing researchers to further dissect the signaling pathways involved in the underlying disease.31 Genome editing technologies coupled with the liver organoid culture platform also allows the reintroduction of genetically corrected stem cells into affected patients where they may differentiate to healthy hepatocytes capable of their wild type functionalities.32

Stay up to date on the latest publications by subscribing to Organoid News, Hepatic Cell News, and ESC & iPSC News.