Should You Still Be Using Immortalized Cell Lines in Your Research?

The establishment of cell lines for in vitro cell culture has been integral to the advancement of scientific research and cell-based technologies. However, increasing concerns relating to the physiological relevance and changes resulting from the continuous passage of cell lines have led many researchers to adopt primary cells in their studies. Human primary cells are isolated directly from tissues including blood and bone marrow and are therefore more representative of tissues compared to cell lines, increasing the physiological relevance of data obtained from in vitro assays or in vivo models.

Why Use Human Primary Cells?

Retention of Genetic and Phenotypic Stability

Unlike cell lines, which are genetically modified for continuous passage or subculture in vitro, primary cells have a finite period of cell culture, ensuring genomic and phenotypic stability and the retention of key characteristics throughout their lifespan. In contrast, cell lines are subject to changes within the proteome after prolonged passage as a result of selective pressures. A comparative analysis of the molecular and functional phenotypes of cell lines and primary cells suggests that cell lines shift cellular resources to benefit functions related to proliferation and division.1 Cell lines derived from late-stage cancers are particularly vulnerable to genetic drift, in which genomes continue to evolve with repeated passage.1,2 The preservation of key aspects of the disease or tissue of origin is critical in the interpretation of your research and should be considered when sourcing your cells.

The commercial supply of primary cells has made cell sourcing a relatively efficient process, with donor screening and regulatory documentation associated with the use of human biological material provided. In contrast, the acquisition and use of a cell line necessitate authentication and validation in order to accurately compare results to data published using the same cell line. Guidelines, including those published by the British Journal of Cancer Research, recommend short tandem repeat (STR) profiling of cell lines, a type of genetic validation typically only conducted by institutional core facilities rather than individual laboratories and that therefore has limited use.3,4 The adoption of primary cells provides an efficient alternative to cell lines without the need to extensively validate the authenticity of cells.

Impact of Cell Line Contamination on Research and Literature

Recent reviews of cell line contamination and misidentification underscore the advantages of using primary cells. The continuous culture of immortalized cell lines can result in cross-contamination or microorganismal contamination as a result of poor cell culture practices including contact from aerosols, unplugged pipets, sharing of media, improper inactivation of feeder layers and clerical errors in labeling or inventory control.2,3 Cell lines frequently become contaminated early in culture, often in the originating laboratory, and any changes in identity can go undetected if the morphology of the contaminating cells is similar to that of the original source.2 A study analyzing 598 leukemia-lymphoma cell lines found that only 59% were authentic and mycoplasma-free.2 Serial transfers of cell lines from one laboratory to another are also associated with an increase in population doubling, selection for abnormal growth characteristics and epigenetic changes.3

Cross-contamination is increasing, resulting in the misidentification of several cell lines published under a variety of names and tissues of origin.5 HeLa cells represent some of the most well-documented cases of cell line misidentification, with researchers acknowledging that Hep-2, WISH and KB cells are all derived from the same originating cell line.5,6,7 Certain journals including the Journal of Cancer Research now require authentication of cell lines when submitting manuscripts and funding agencies have similarly responded.2 However, the time, effort and cost spent validating cell lines for authenticity and potential contamination remain barriers to the demanding pace of research, in which cell line misidentification can impact funding, publication, patents and clinical trials.4,8

Growing concerns over the genetic, proteomic and epigenetic changes with continuous culture and the authentication, contamination and misidentification of cell lines have led many researchers to adopt primary cells as their preferred culture system. Human primary cells retain key aspects of the tissue of origin, reducing the need for validation in other models. In addition, human primary cells more accurately reflect the inherent variability between donors or samples, including HLA type and CMV status, critical for interpreting your data. This minimizes broad assumptions often derived when using cell lines for studies and facilitates the translation of basic research into preclinical or clinical applications. Incorporating human primary cells in your cell-based assays is an efficient method for producing more physiologically relevant conditions in culture, enabling you to generate meaningful data predictive of in vivo outcomes.

58:45
Webinar
Identification of Stem Cells in Myeloid Malignancies - Opportunities for Discovery and Translation
View All Resources 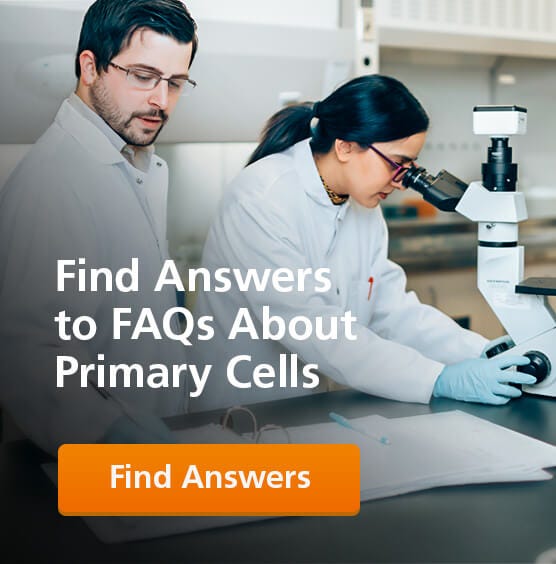