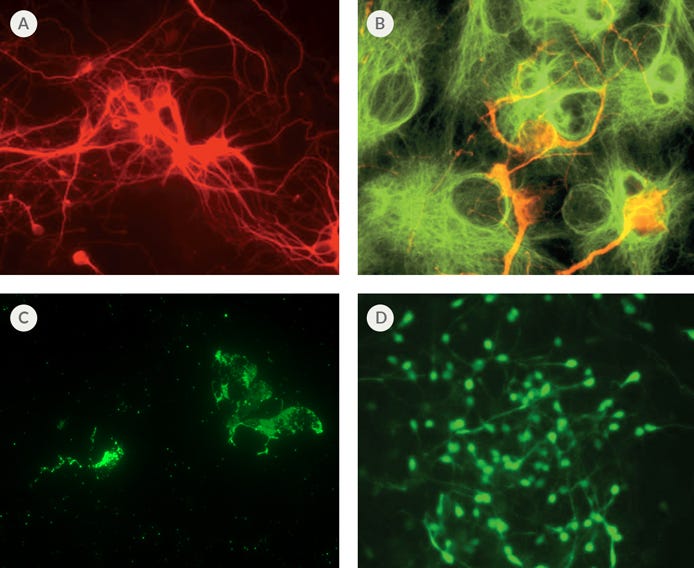 Insulin-like growth factor (IGF) is involved in regulating many processes during neural development, and IGF binding protein-4 (IGFBP4) functions as a modulator of IGF actions or in an IGF-independent manner (e.g., via inhibiting Wnt/β-catenin signaling). In the present study, neural progenitor cells (NPCs) were isolated from the forebrain of newborn mice to investigate effects of IGFBP4 on the proliferation and differentiation of NPCs. The proliferation of NPCs was evaluated using Cell Counting Kit-8 (CCK-8) after treatment with or without IGFBP4 as well as blockers of IGF-IR and β-catenin. Phosphorylation levels of Akt, Erk1, 2 and p38 were analyzed by Western blotting. The differentiation of NPCs was evaluated using immunofluorescence and Western blotting. It was shown that exogenous IGFBP4 significantly inhibited the proliferation of NPCs and it did not induce a more pronounced inhibition of cell proliferation after blockade of IGF-IR but it did after antagonism of β-catenin. Akt phosphorylation was significantly decreased and phosphorylation levels of Erk1, 2 and p38 were not significantly changed in IGFBP4-treated NPCs. Excessive IGFBP4 significantly promoted NPCs to differentiate into astrocytes and neurons. These data suggested that exogenous IGFBP4 inhibits proliferation and promotes differentiation of neural progenitor cells mainly through IGF-IR signaling pathway.
View publication
L2hgdh deficiency accumulates L-2-hydroxyglutarate with progressive leukoencephalopathy and neurodegeneration Ma S et al. Molecular and Cellular Biology 2017 JAN

While no effective therapy is available for the treatment of methamphetamine (METH)-induced neurotoxicity, aerobic exercise is being proposed to improve depressive symptoms and substance abuse outcomes. The present study focuses on the effect of exercise on METH-induced aberrant neurogenesis in the hippocampal dentate gyrus in the context of the blood-brain barrier (BBB) pathology. Mice were administered with METH or saline by i.p. injections for 5 days with an escalating dose regimen. One set of mice was sacrificed 24 h post last injection of METH, and the remaining animals were either subjected to voluntary wheel running (exercised mice) or remained in sedentary housing (sedentary mice). METH administration decreased expression of tight junction (TJ) proteins and increased BBB permeability in the hippocampus. These changes were preserved post METH administration in sedentary mice and were associated with the development of significant aberrations of neural differentiation. Exercise protected against these effects by enhancing the protein expression of TJ proteins, stabilizing the BBB integrity, and enhancing the neural differentiation. In addition, exercise protected against METH-induced systemic increase in inflammatory cytokine levels. These results suggest that exercise can attenuate METH-induced neurotoxicity by protecting against the BBB disruption and related microenvironmental changes in the hippocampus.
View publication
View All Publications