The EasySep™ Human CD8 Positive Selection Kit II is designed to isolate CD8+ cells from fresh or previously frozen peripheral blood mononuclear cells or washed leukapheresis samples by immunomagnetic positive selection. Desired cells are targeted with antibody complexes recognizing CD8 and magnetic particles. The cocktail also contains an antibody to human Fc receptor to minimize nonspecific binding. Labeled cells are separated using an EasySep™ magnet without the use of columns. Cells of interest remain in the tube while unwanted cells are poured off. The CD8 antigen is expressed on cytotoxic T cells and weakly on a subset of NK cells. 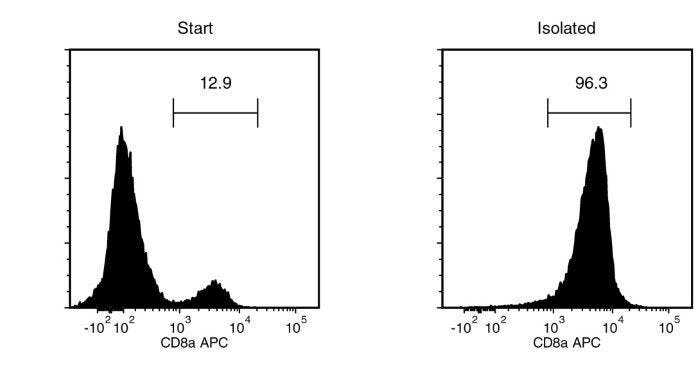 Approaches to deplete persistent HIV infection are needed. We investigated the combined impact of the latency reversing agent vorinostat (VOR) and AGS-004, an autologous dendritic cell immunotherapeutic, on the HIV reservoir. HIV+, stably treated participants in whom resting CD4+ T cell-associated HIV RNA (rca-RNA) increased after VOR exposure ex vivo and in vivo received 4 doses of AGS-004 every 3 weeks, followed by VOR every 72 hours for 30 days, and then the cycle repeated. Change in VOR-responsive host gene expression, HIV-specific T cell responses, low-level HIV viremia, rca-RNA, and the frequency of resting CD4+ T-cell infection (RCI) was measured at baseline and after each cycle. No serious treatment-related adverse events were observed among five participants. As predicted, VOR-responsive host genes responded uniformly to VOR dosing. Following cycles of AGS-004 and VOR, rca-RNA decreased significantly in only two participants, with a significant decrease in SCA observed in one of these participants. However, unlike other cohorts dosed with AGS-004, no uniform increase in HIV-specific immune responses following vaccination was observed. Finally, no reproducible decline of RCI, defined as a decrease of {\textgreater}50{\%}, was observed. AGS-004 and VOR were safe and well-tolerated, but no substantial impact on RCI was measured. In contrast to previous clinical data, AGS-004 did not induce HIV-specific immune responses greater than those measured at baseline. More efficacious antiviral immune interventions, perhaps paired with more effective latency reversal, must be developed to clear persistent HIV infection.
View publication
Multiplexed enrichment and genomic profiling of peripheral blood cells reveal subset-specific immune signatures. M. Reyes et al. Science advances 2019 jan

Specialized immune cell subsets are involved in autoimmune disease, cancer immunity, and infectious disease through a diverse range of functions mediated by overlapping pathways and signals. However, subset-specific responses may not be detectable in analyses of whole blood samples, and no efficient approach for profiling cell subsets at high throughput from small samples is available. We present a low-input microfluidic system for sorting immune cells into subsets and profiling their gene expression. We validate the system's technical performance against standard subset isolation and library construction protocols and demonstrate the importance of subset-specific profiling through in vitro stimulation experiments. We show the ability of this integrated platform to identify subset-specific disease signatures by profiling four immune cell subsets in blood from patients with systemic lupus erythematosus (SLE) and matched control subjects. The platform has the potential to make multiplexed subset-specific analysis routine in many research laboratories and clinical settings.
View publication
PD-1 blockade potentiates HIV latency reversal ex vivo in CD4+ T cells from ART-suppressed individuals. R. Fromentin et al. Nature communications 2019 feb