Why Use the Monolayer Culture Protocol for Neural Induction 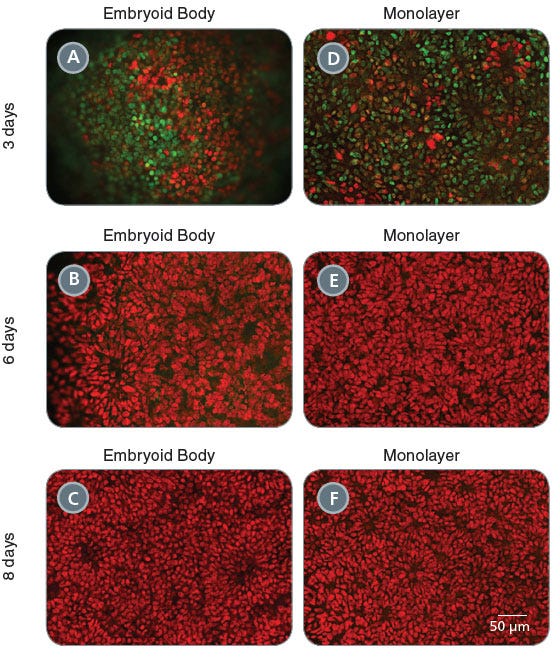 Immunocytochemistry and quantitative PCR data show that during neural induction of ES cells, OCT4 expression decreases rapidly in the first 3 - 4 days, after which PAX6 expression increases (Figures 4 - 5). This monolayer culture protocol can also be used for neural induction of human iPS cell lines, although the time-course of induction may be slightly longer. In addition, highly efficient neural induction of human ES and iPS cells can be achieved, regardless of whether they were previously maintained in mTeSR™1, mTeSR™ Plus, or TeSR™-E8™ hPSC culture media (data not shown).

Figure 5. Downregulation of OCT4 and Upregulation of PAX6 During Neural Induction of Human ES Cells Using a Monolayer Culture Protocol

Here we describe a procedure for neural induction using STEMdiff™ Neural Induction Medium in a monolayer culture-based system. Using this method, PAX6-positive NPCs can be generated efficiently. This simple protocol can be used to achieve rapid and efficient neural induction of ES or iPS cells maintained in either mTeSR™1, mTeSR™ Plus, or TeSR™-E8™.

Explore more products for neural induction from hPSCs, including specialized cell culture and storage media, supplements, antibodies, cytokines, and small molecules. Contact us by phone or email or use the LiveChat function on this page to discuss your specific needs and applications.