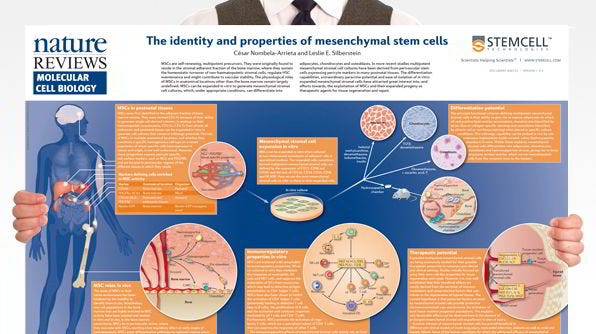 Wallchart
The Identity and Properties of Mesenchymal Stem Cells

No, the antibody cocktail can be added directly to the sample.
View More View Less

PURPOSE The radiosensitivity of the normal intestinal epithelium is the major limiting factor for definitive radiotherapy against abdominal malignancies. Radiosensitizers, which can be used without augmenting radiation toxicity to normal tissue, are still an unmet need. Inhibition of proteosomal degradation is being developed as a major therapeutic strategy for anticancer therapy as cancer cells are more susceptible to proteasomal inhibition-induced cytotoxicity compared with normal cells. Auranofin, a gold-containing antirheumatoid drug, blocks proteosomal degradation by inhibiting deubiquitinase inhibitors. In this study, we have examined whether auranofin selectively radiosensitizes colon tumors without promoting radiation toxicity in normal intestine. EXPERIMENTAL DESIGN The effect of auranofin (10 mg/kg i.p.) on the radiation response of subcutaneous CT26 colon tumors and the normal gastrointestinal epithelium was determined using a mouse model of abdominal radiation. The effect of auranofin was also examined in a paired human colonic organoid system using malignant and nonmalignant tissues from the same patient. RESULTS Both in the mouse model of intestinal injury and in the human nonmalignant colon organoid culture, auranofin pretreatment prevented radiation toxicity and improved survival with the activation of p53/p21-mediated reversible cell-cycle arrest. However, in a mouse model of abdominal tumor and in human malignant colonic organoids, auranofin inhibited malignant tissue growth with inhibition of proteosomal degradation, induction of endoplasmic reticulum stress/unfolded protein response, and apoptosis. CONCLUSIONS Our data suggest that auranofin is a potential candidate to be considered as a combination therapy with radiation to improve therapeutic efficacy against abdominal malignancies.
View publication
New approach to isolate mesenchymal stem cell (MSC) from human umbilical cord blood. Hussain I et al. Cell biology international 2012 JUL

HUCB (human umbilical cord blood) has been frequently used in clinical allogeneic HSC (haemopoietic stem cell) transplant. However, HUCB is poorly recognized as a rich source of MSC (mesenchymal stem cell). The aim of this study has been to establish a new method for isolating large number of MSC from HUCB to recognize it as a good source of MSC. HUCB samples were collected from women following their elective caesarean section. The new method (Clot Spot method) was carried out by explanting HUCB samples in mesencult complete medium and maintained in 37°C, in a 5&percnt; CO2 and air incubator. MSC presence was established by quantitative and qualitative immunophenotyping of cells and using FITC attached to MSC phenotypic markers (CD29, CD73, CD44 and CD105). Haematopoietic antibodies (CD34 and CD45) were used as negative control. MSC differentiation was examined in neurogenic and adipogenic media. Immunocytochemistry was carried out for the embryonic markers: SOX2 (sex determining region Y-box 2), OLIG-4 (oligodendrocyte-4) and FABP-4 (fatty acid binding protein-4). The new method was compared with the conventional Rosset Sep method. MSC cultures using the Clot Spot method showed 3-fold increase in proliferation rate compared with conventional method. Also, the cells showed high expression of MSC markers CD29, CD73, CD44 and CD105, but lacked the expression of specific HSC markers (CD34 and CD45). The isolated MSC showed some differentiation by expressing the neurogenic (SOX2 and Olig4) and adipogenic (FABP-4) markers respectively. In conclusion, HUCB is a good source of MSC using this new technique.
View publication
Gene expression analysis in osteoblastic differentiation from peripheral blood mesenchymal stem cells. Valenti MT et al. Bone 2008 DEC

MSCs are known to have an extensive proliferative potential and ability to differentiate in various cell types. Osteoblastic differentiation from mesenchymal progenitor cells is an important step of bone formation, though the pattern of gene expression during differentiation is not yet well understood. Here, to investigate the possibility to obtain a model for in vitro bone differentiation using mesenchymal stem cells (hMSCs) from human subjects non-invasively, we developed a method to obtain hMSCs-like cells from peripheral blood by a two step method that included an enrichment of mononuclear cells followed by depletion of unwanted cells. Using these cells, we analyzed the expression of transcription factor genes (runt-related transcription factor 2 (RUNX2) and osterix (SP7)) and bone related genes (osteopontin (SPP1), osteonectin (SPARC) and collagen, type I, alpha 1 (COLIA1)) during osteoblastic differentiation. Our results demonstrated that hMSCs can be obtained from peripheral blood and that they are able to generate CFU-F and to differentiate in osteoblast and adipocyte; in this study, we also identified a possible gene expression timing during osteoblastic differentiation that provided a powerful tool to study bone physiology.
View publication
View All Publications