The RosetteSep™ Human Hematopoietic Progenitor Cell Enrichment Cocktail is designed to isolate progenitor cells from cord blood and whole blood by negative selection. Unwanted cells are targeted for removal with Tetrameric Antibody Complexes recognizing CD2, CD3, CD14, CD16, CD19, CD24, CD56, CD61, CD66b and glycophorin A on red blood cells (RBCs). When centrifuged over a buoyant density medium such as Lymphoprep™ (Catalog #07801), the unwanted cells pellet along with the RBCs. The purified progenitor cells are present as a highly enriched population at the interface between the plasma and the buoyant density medium. If using large volumes of blood, we recommend the RosetteSep™ Cord Blood Progenitor Enrichment Kit with HetaSep™ (Catalog #15276).
• Fast and easy-to-use
• Requires no special equipment or training
• Untouched, viable cells
• Can be combined with SepMate™ for consistent, high-throughput sample processing 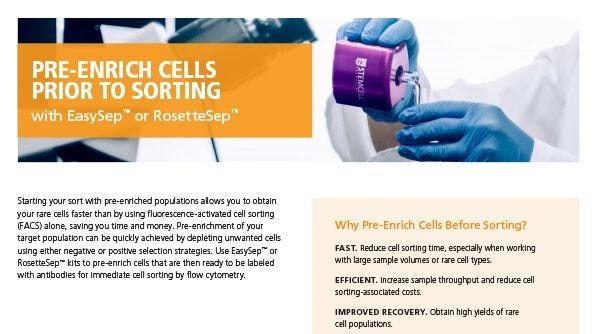 Starting with fresh cord blood, the enrichment of CD34+ cells is typically 29 ± 9%.

The effector potential of NK cells is counterbalanced by their sensitivity to inhibition by self" MHC class I molecules in a process called "education." In humans�
Cell transplantation 2010 JAN In vitro and in vivo analysis of endothelial progenitor cells from cryopreserved umbilical cord blood: are we ready for clinical application? Vanneaux V et al.
Abstract
View publication

Umbilical cord blood (CB) represents a main source of circulating endothelial progenitor cells (cEPCs). In view of their clinical use, in either the autologous or allogeneic setting, cEPCs should likely be expanded from CB kept frozen in CB banks. In this study, we compared the expansion, functional features, senescence pattern over culture, and in vivo angiogenic potential of cEPCs isolated from fresh or cryopreserved CB (cryoCB). cEPCs could be isolated in only 59&percnt; of cryoCB compared to 94&percnt; for fresh CB, while CB units were matched in terms of initial volume, nucleated and CD34(+) cell number. Moreover, the number of endothelial colony-forming cells was significantly decreased when using cryoCB. Once cEPCs culture was established, the proliferation, migration, tube formation, and acetylated-LDL uptake potentials were similar in both groups. In addition, cEPCs derived from cryoCB displayed the same senescence status and telomeres length as that of cEPCs derived from fresh CB. Karyotypic aberrations were found in cells obtained from both fresh and cryoCB. In vivo, in a hind limb ischemia murine model, cEPCs from fresh and cryoCB were equally efficient to induce neovascularization. Thus, cEPCs isolated from cryoCB exhibited similar properties to those of fresh CB in vitro and in vivo. However, the low frequency of cEPCs colony formation after cryopreservation shed light on the need for specific freezing conditions adapted to cEPCs in view of their future clinical use.
Blood 2009 MAR The Axl/Gas6 pathway is required for optimal cytokine signaling during human natural killer cell development. Park I-K et al.
Abstract
View publication

Interleukin-15 (IL-15) is essential for natural killer (NK) cell differentiation. In this study, we assessed whether the receptor tyrosine kinase Axl and its ligand, Gas6, are involved in IL-15-mediated human NK differentiation from CD34(+) hematopoietic progenitor cells (HPCs). Blocking the Axl-Gas6 interaction with a soluble Axl fusion protein (Axl-Fc) or the vitamin K inhibitor warfarin significantly diminished the absolute number and percentage of CD3(-)CD56(+) NK cells derived from human CD34(+) HPCs cultured in the presence of IL-15, probably resulting in part from reduced phosphorylation of STAT5. In addition, CD3(-)CD56(+) NK cells derived from culture of CD34(+) HPCs with IL-15 and Axl-Fc had a significantly diminished capacity to express interferon-gamma or its master regulator, T-BET. Culture of CD34(+) HPCs in the presence of c-Kit ligand and Axl-Fc resulted in a significant decrease in the frequency of NK precursor cells responding to IL-15, probably the result of reduced c-Kit phosphorylation. Collectively, our data suggest that the Axl/Gas6 pathway contributes to normal human NK-cell development, at least in part via its regulatory effects on both the IL-15 and c-Kit signaling pathways in CD34(+) HPCs, and to functional NK-cell maturation via an effect on the master regulatory transcription factor T-BET.
Experimental biology and medicine (Maywood, N.J.) 2009 MAR Maitake beta-glucan enhances umbilical cord blood stem cell transplantation in the NOD/SCID mouse. Lin H et al.
Abstract
View publication

Beta glucans are cell wall constituents of yeast, fungi and bacteria, as well as mushrooms and barley. Glucans are not expressed on mammalian cells and are recognized as pathogen-associated molecular patterns (PAMPS) by pattern recognition receptors (PRR). Beta glucans have potential activity as biological response modifiers for hematopoiesis and enhancement of bone marrow recovery after injury. We have reported that Maitake beta glucan (MBG) enhanced mouse bone marrow (BMC) and human umbilical cord blood (CB) cell granulocyte-monocyte colony forming unit (GM-CFU) activity in vitro and protected GM-CFU forming stem cells from doxorubicin (DOX) toxicity. The objective of this study was to determine the effects of MBG on expansion of phenotypically distinct subpopulations of progenitor and stem cells in CB from full-term infants cultured ex vivo and on homing and engraftment in vivo in the nonobese diabetic/severe combined immunodeficient (NOD/SCID) mouse. MBG promoted a greater expansion of CD34+CD33+CD38- human committed hematopoietic progenitor (HPC) cells compared to the conventional stem cell culture medium (P = 0.002 by ANOVA). CD34+CXCR4+CD38- early, uncommitted human hematopoietic stem cell (HSC) numbers showed a trend towards increase in response to MBG. The fate of CD34+ enriched CB cells after injection into the sublethally irradiated NOS/SCID mouse was evaluated after retrieval of xenografted human CB from marrow and spleen by flow cytometric analysis. Oral administration of MBG to recipient NOS/SCID mice led to enhanced homing at 3 days and engraftment at 6 days in mouse bone marrow (P = 0.002 and P = 0.0005, respectively) compared to control mice. More CD34+ human CB cells were also retrieved from mouse spleen in MBG treated mice at 6 days after transplantation. The studies suggest that MBG promotes hematopoiesis through effects on CD34+ progenitor cell expansion ex vivo and when given to the transplant recipient could enhance CD34+ precursor cell homing and support engraftment.
Blood 2007 MAY Mapping early conformational changes in alphaIIb and beta3 during biogenesis reveals a potential mechanism for alphaIIbbeta3 adopting its bent conformation. Mitchell WB et al.
Abstract
View publication