The phenotypic characterization of mouse hematopoietic stem and progenitor cells (HSPCs), combined with functional cell-based assays, has greatly improved our understanding of the relationships between hematopoietic stem cells (HSCs), progenitor cells, and mature blood cells. The hematopoietic system is hierarchical in nature, with multipotent long-term HSCs (LT-HSCs) existing at the highest point on a branched hierarchy consisting of more proliferative progenitors further down the tree. While this relatively simple model has recently been challenged,1-3 the fact remains that primitive HSPC subpopulations are uniquely responsible for generating the billions of mature blood cells that must enter the circulation every day. To regulate these tremendous demands, strict intrinsic and extrinsic mechanisms are in place to control HSC cycling, self-renewal, and differentiation. In order to properly study the complex mechanisms controlling these important cell populations, scientists require methods to identify, isolate, and quantify HSPCs. 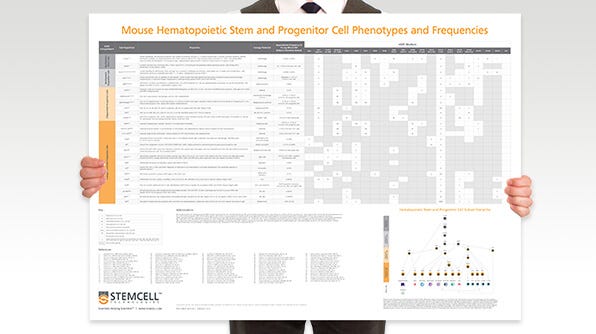 Learn more about mouse HSPC subsets with this wallchart, which provides a handy overview of the subset hierarchy, including their frequencies and phenotypes.

Several commonly used methods for phenotyping and purifying mouse HSPCs have relied on the co-expression of c-Kit and Sca1 cell surface proteins, combined with an absence of lineage (Lin) markers that are typically present on mature blood cells such as T and B lymphocytes, NK cells, granulocytes, macrophages/ monocytes, and red blood cells.4 All multipotent hematopoietic cells are encompassed within the Lin-Sca1+c-Kit+ (LSK) fraction of the bone marrow (BM), however, the frequency of true HSCs within this population is only about 10%. Moreover, this phenotype is only appropriate for identifying HSPCs present in steady-state adult BM of certain mouse strains, e.g. C57Bl/6. Additionally, the LSK phenotype is not useful in other mouse strains, e.g. Balb/c, or if HSPCs are activated and proliferating (particularly upon in vitro culture), or from earlier timepoints of mouse embryonic development.5-7

The development of the SLAM code of markers, adjudicated by the markers CD150 and CD48, represented a major improvement for further enrichment of the LSK population of mouse HSPCs. The frequency of true HSCs within the CD150+CD48- LSK (LSK/SLAM) population is about 40% in normal adult mouse BM.8 This phenotype also enables improved resolution of HSCs in various experimental contexts and from embryonic sources.7,9 The ESLAM phenotype (CD45+EPCR+CD150+CD48-) is notable as it does not use the traditional LSK panel. Instead, the SLAM markers are combined with the endothelial cell protein C receptor (EPCR) to increase the purity of isolated HSPCs.10,11 Inclusion of the CD45 marker in this panel enables the exclusion of contaminating endothelial cells which, along with other cells, express EPCR, and helps standardize gates for flow cytometric-based analyses.12

Historically it has been difficult to perform phenotypic analyses of different HSPC subsets due to their low frequency (< 1 in 10,000 cells in BM), absence of specific cell surface markers, and innate functional heterogeneity. The continued evolution of flow cytometers, together with an increasing number of monoclonal antibodies and new fluorochromes to which these can be conjugated, has made methods for studying rare HSPC subsets more readily available.

Given the many different configurations of lasers, band-pass filters, and detectors that exist in modern flow cytometers, it is critical to optimize antibody panels specifically for the user’s particular instrument. It is preferable to use fluorochromes with high fluorescence intensities to facilitate the detection of antigens that are expressed at low levels, and conversely to reserve fluorochromes with weaker fluorescence levels to detect markers that are expressed at high levels. Proper titration experiments will help optimize concentrations and combinations of conjugated antibodies to be used together in a phenotyping panel.

The phenotyping panels described in Tables 1 - 3 include a cocktail of Lin markers conjugated to FITC, or an anti-CD45 antibody conjugated to Alexa Fluor® 488. As the relative fluorescence intensities of FITC and Alexa Fluor® 488 are significantly lower than most other fluorochromes, the antigens chosen for detection with these reagents are expressed at high levels. Additionally, although flow cytometry analysis software can automatically compensate overlap between fluorescence channels, it is still important to minimize spectral overlap when choosing an antibody/fluorochrome combination, as this can impact the ability to detect the population of interest.

As no single specific marker exists for this population, HSPC subsets must be identified by the expression of combinations of markers. Although some high-end flow cytometers can detect up to 18 distinct fluorescence signals, inclusion of many fluorochromes into a phenotyping panel can make experimental design and data analysis difficult. One approach to keep the number of fluorochromes manageable is the use of a common channel to exclude cells that are not of interest, specifically mature blood cells and “late” progenitor cells that express Lin antigens such as CD3, CD11b, CD45R, Gr-1, and Ter119. Adult mouse HSPCs either lack or express only very low levels of Lin markers. Antibodies used to detect these antigens are all conjugated to FITC. In the examples shown in Figures 1 and 2, FITC-conjugated antibodies against a panel of Lin antigens were combined in a single panel to allow detection of the unwanted Lin+ cells in one fluorescence channel. This frees up the other channels to distinguish HSPC subsets using other, more important markers in the staining panel.14

Two types of controls are required to validate a multicolor flow cytometry panel: (i) “setup” controls, which consist of an unstained sample and single antibody-stained controls, and (ii) “gating” controls, also known as “fluorescence-minus-one” (FMO) controls.14,15

Setup controls are used to properly establish various cytometer parameters by facilitating the establishment of photomultiplier tube (PMT) voltage gains and determining the levels of spectral overlap between fluorescent reagents. Unstained cells help set PMT voltage settings and define boundaries to gate out dead cells, but their background fluorescence can differ from cells that have been stained with multiple reagents.11 Single antibody-stained controls consist of cells stained separately with a single fluorescently labeled antibody. The use of these controls ensures that other reagents in the mix do not adversely affect the fluorescence of the antibody in question.

The use of matching isotype control antibodies, which were historically implemented in multicolor flow cytometry, are now considered to provide little value as they can differ in their background staining from the test reagents they are meant to be compared to. FMO controls combine all antibodies except for the one of interest. These controls measure the specific fluorescence of a given fluorochrome in the context of other reagents present in the cocktail. They also serve as an important control when setting up gates to analyze target populations. Tables 4, 5, and 6 include FMO controls for the staining panels described in Tables 1, 2, and 3, respectively. Overall, once a phenotyping panel has been confirmed and validated, it may not be necessary to run all FMO and single antibody-stained controls on a routine basis, thus allowing one to conserve cells in small samples and reduce workload. For both control and test samples, non-specific staining can be reduced by pre-incubating cells with serum (at ~10% v/v concentration) from the same species as the test antibodies and/or using an anti-CD16/32 antibody to block Fc receptor binding.

Ideally, cells from the test sample will be used for all of the aforementioned controls. This provides the most accurate context for setting of PMT voltages and interpreting the fluorescence signals observed. However, using cells from precious experimental samples can be difficult when cell numbers are limited, when there are differences in autofluorescence between various cell subsets, or when the target population represents a very small percentage of the bulk population.13 Compensation beads provide an excellent alternative to the use of cells for setup controls. Commercially available compensation beads bind antibodies with high affinity and thus emit a high fluorescence signal with a low coefficient of variation. To provide an optimal fluorescence signal it is important to titrate the amount of all antibodies. 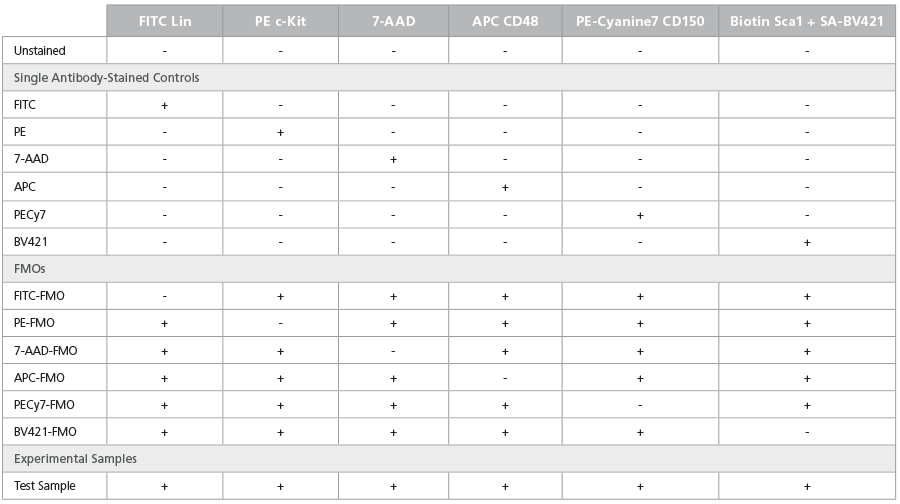 To isolate, prepare, and stain BM cells for flow cytometric analysis of HSPCs, follow the general protocol below:

Several gating strategies can be employed to eliminate unwanted events prior to phenotyping HSPCs. Knowing the forward scatter (FSC) and side scatter (SSC) characteristics of your cells of interest can aid in proper gating. HSPCs are relatively uniform in size and lack intracellular complexity. As shown in Figures 1 - 3, the use of a tight FSC or SSC gate allows for the inclusion of small, non-granular cells that contain HSPCs while excluding dead cells, debris, and myeloid cells that are large and have lobular nuclei and/or a granular cytoplasm. FSC-area (FSC-A) and -height (FSC-H) parameters are also used to exclude cell doublets or triplets, which may be interpreted as cells co-expressing multiple markers. SSC signals can also be used to discriminate singlet events. Dead cells typically exhibit a greater autofluorescence than live cells and can non-specifically bind antibodies, thus appearing as false positives in the sample. Their exclusion improves the detection of live cells that express antigens of interest but at lower levels of fluorescence. After such pre-gating steps have been implemented, the frequency of LSK and LSK/SLAM HSCs can be determined by gating out Lin+ cells, followed by the analysis of cells expressing c-Kit, Sca1 (Figure 1), and SLAM markers (Figure 2). To identify ESLAM HSCs, follow the steps to pre-gate as above, and then set gates to identify CD45+EPCR+ cells followed by the analysis of the CD150+CD48- population (Figure 3). 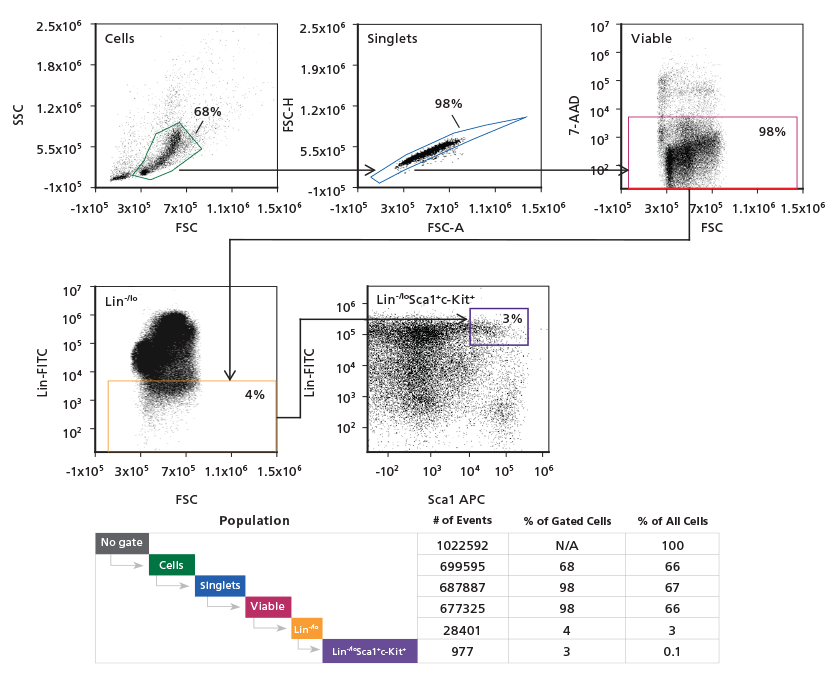 Adult C57Bl/6 BM cells were stained with a FITC lineage cocktail, PE c-Kit, and APC Sca1 antibodies. Primitive cells are initially refined using a light scatter gate followed by the exclusion of doublets and dead cells. The LSK population is identified by first excluding Lin+ cells followed by gating on the Sca1+c-Kit+ population. Population subset analysis of the number and percent of cells in gated regions and within the entire population, is shown. 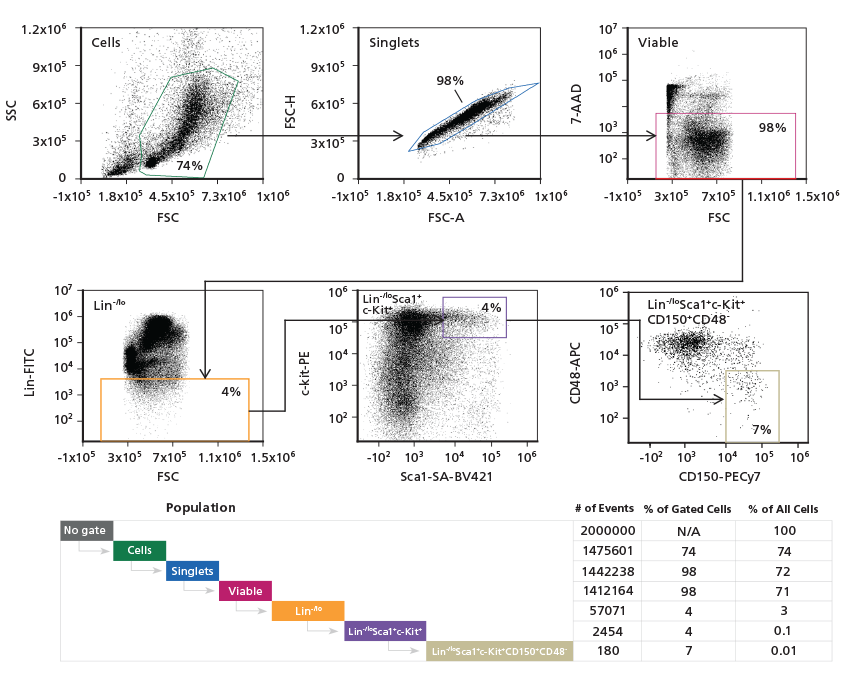 Adult mouse C57Bl/6 BM cells were stained with a FITC lineage cocktail, PE c-Kit, Biotin Sca1, APC CD48, and PECy7 CD150 antibodies. Binding of the Biotin Sca1 antibody was revealed by secondary staining with streptavidin conjugated to BV421 (SA-BV421). The hematopoietic progenitor population was initially refined using a light scatter gate followed by discrimination of doublets and dead cells. Lin+ cells were excluded, followed by gating on the Sca1+c-Kit+(LSK) population. CD150+CD48- cells within the LSK population were identified and quantitated in the final gating step. Population subset analysis of the number and percent of cells in gated regions and within the entire population, is shown. 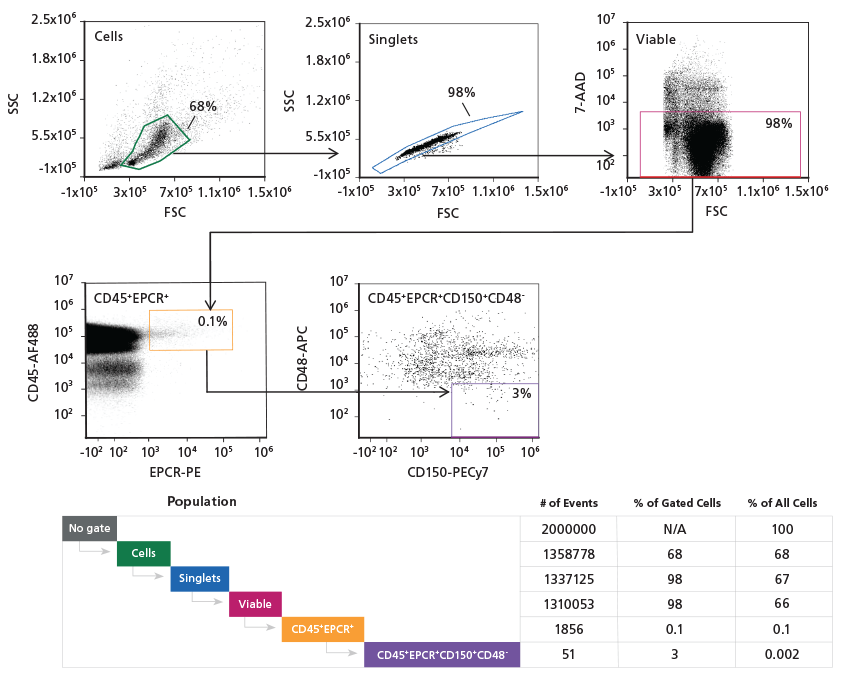 Adult mouse C57Bl/6 BM cells were stained with Alexa Fluor® 488 CD45, APC CD48, PECy7 CD150, and PE EPCR antibodies. The hematopoietic progenitor cell population was initially refined using a light scatter gate followed by discrimination of doublets and dead cells. The population was then gated on CD45+EPCR+, followed by gating on CD150+CD48- cells. Population subset analysis of the number and percent of cells in gated regions and within the entire population, is shown.

Studies of hematopoiesis, and HSC biology in particular, are greatly facilitated by the use of highly purified populations of primitive cells whose phenotype has been very well defined by the work of many investigators over the past 30 years. The procedures described herein highlight the relative ease of interrogating the phenotype of mouse HSCs by flow cytometry using three independent antibody staining panels described in the literature. Additional pre-enrichment procedures, not described herein but employed before antibody staining and sorting, can be used to increase the frequency of HSPCs. This approach can reduce fluorescence-activated cell sorting (FACS) time and facilitate more reliable detection (and isolation) of rare subsets under certain experimental conditions. Lin-/lo cells can be pre-enriched using the EasySep™ Mouse Hematopoietic Progenitor Cell Isolation Kit (Catalog #19856) for this purpose. By combining the correct antigen-fluorochrome combinations with the preparation of proper controls, flow cytometry is a powerful tool for studying mouse hematopoiesis.