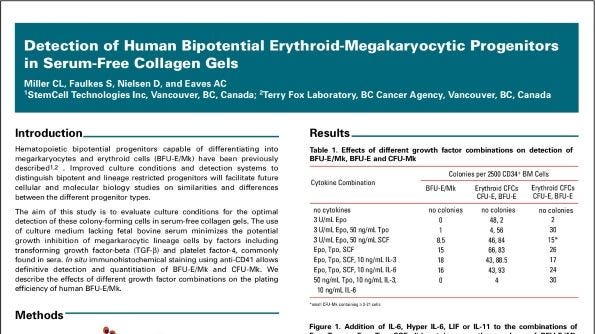 Semi-solid media (such as methylcellulose-based or collagen-based) allow the clonal progeny of a single progenitor cell to stay together so you can recognize distinct colonies.
View More View Less

Megakaryoblastic leukemia 1 (MKL1), identified as part of the t(1;22) translocation specific to acute megakaryoblastic leukemia, is highly expressed in differentiated muscle cells and promotes muscle differentiation by activating serum response factor (SRF). Here we show that Mkl1 expression is up-regulated during murine megakaryocytic differentiation and that enforced overexpression of MKL1 enhances megakaryocytic differentiation. When the human erythroleukemia (HEL) cell line is induced to differentiate with 12-O-tetradecanoylphorbol 13-acetate, overexpression of MKL1 results in an increased number of megakaryocytes with a concurrent increase in ploidy. MKL1 overexpression also promotes megakaryocytic differentiation of primary human CD34(+) cells cultured in the presence of thrombopoietin. The effect of MKL1 is abrogated when SRF is knocked down, suggesting that MKL1 acts through SRF. Consistent with these findings in human cells, knockout of Mkl1 in mice leads to reduced platelet counts in peripheral blood, and reduced ploidy in bone marrow megakaryocytes. In conclusion, MKL1 promotes physiologic maturation of human and murine megakaryocytes.
View publication
Application of human CFU-Mk assay to predict potential thrombocytotoxicity of drugs. Pessina A et al. Toxicology in vitro : an international journal published in association with BIBRA 2009 FEB

Megakaryocytopoiesis gives rise to platelets by proliferation and differentiation of lineage-specific progenitors, identified in vitro as Colony Forming Unit-Megakaryocytes (CFU-Mk). The aim of this study was to refine and optimize the in vitro Standard Operating Procedure (SOP) of the CFU-Mk assay for detecting drug-induced thrombocytopenia and to prevalidate a model for predicting the acute exposure levels that cause maximum tolerated decreases in the platelets count, based on the correlation with the maximal plasma concentrations (C max) in vivo. The assay was linear under the SOP conditions, and the in vitro endpoints (percentage of colonies growing) were reproducible within and across laboratories. The protocol performance phase was carried out testing 10 drugs (selected on the base of their recognised or potential in vivo haematotoxicity, according to the literature). Results showed that a relationship can be established between the maximal concentration in plasma (C max) and the in vitro concentrations that inhibited the 10-50-90 percent of colonies growth (ICs). When C max is lower than IC10, it is possible to predict that the chemicals have no direct toxicity effect on CFU-Mk and could not induce thrombocytopenia due to bone marrow damage. When the C max is higher than IC90 and/or IC50, thrombocytopenia can occur due to direct toxicity of chemicals on CFU-Mk progenitors.
View publication
Incomplete restoration of Mpl expression in the mpl-/- mouse produces partial correction of the stem cell-repopulating defect and paradoxical thrombocytosis. Lannutti BJ et al. Blood 2009 FEB

Expression of Mpl is restricted to hematopoietic cells in the megakaryocyte lineage and to undifferentiated progenitors, where it initiates critical cell survival and proliferation signals after stimulation by its ligand, thrombopoietin (TPO). As a result, a deficiency in Mpl function in patients with congenital amegakaryocytic thrombocytopenia (CAMT) and in mpl(-/-) mice produces profound thrombocytopenia and a severe stem cell-repopulating defect. Gene therapy has the potential to correct the hematopoietic defects of CAMT by ectopic gene expression that restores normal Mpl receptor activity. We rescued the mpl(-/-) mouse with a transgenic vector expressing mpl from the promoter elements of the 2-kb region of DNA just proximal to the natural gene start site. Transgene rescued mice exhibit thrombocytosis but only partial correction of the stem cell defect. Furthermore, they show very low-level expression of Mpl on platelets and megakaryocytes, and the transgene-rescued megakaryocytes exhibit diminished TPO-dependent kinase phosphorylation and reduced platelet production in bone marrow chimeras. Thrombocytosis is an unexpected consequence of reduced Mpl expression and activity. However, impaired TPO homeostasis in the transgene-rescued mice produces elevated plasma TPO levels, which serves as an unchecked stimulus to drive the observed excessive megakaryocytopoiesis.
View publication
View All Publications