Mesenchymal stromal cells (also known as mesenchymal stem cells; MSCs) are an actively investigated area in cell therapeutics. However, despite widespread use of MSCs in research projects and clinical trials, leading researchers in the field believe that these cells are still poorly characterized and require clearer naming conventions.

In 2019, STEMCELL Technologies led a survey asking MSC researchers to voice their opinions on the state of the field. 450 researchers from all around the world participated in this survey, the results of which are consolidated in an infographic. Here, we highlight and comment on some of the interesting findings from the survey results.

How concerned are you about experimental outcome/reproducibility when using serum in your MSC culture media? 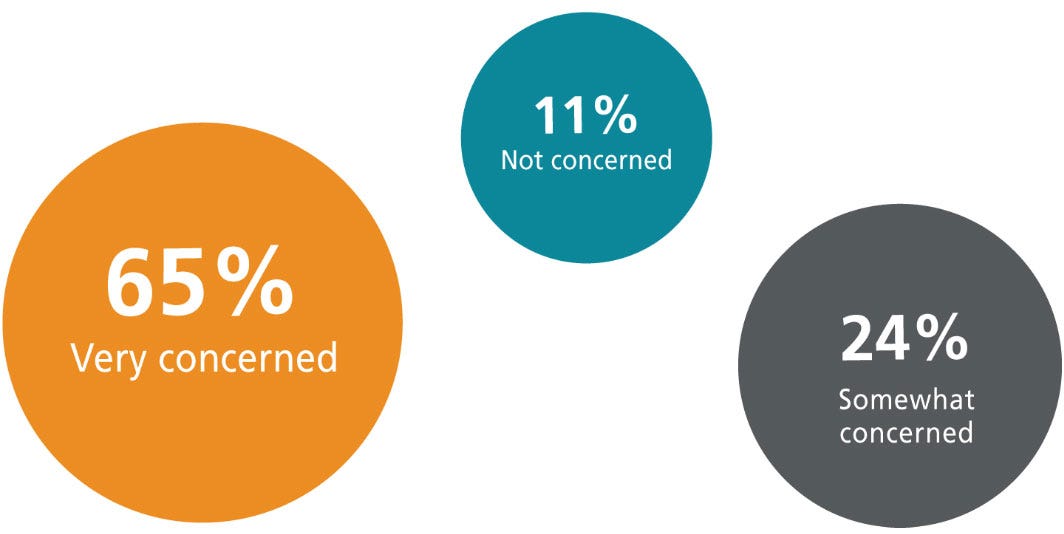 Traditionally, MSCs have been cultured in media containing fetal bovine serum (FBS). However, the issues involving the use of animal-derived components such as serum—and in particular FBS—have been a growing source of concern for many scientists. FBS is known for inherent batch-to-batch variability that compromises experimental reproducibility.

The contents of serum can vary based on the source's age, diet, and geographical location, the season of serum collection, and other factors.1 Serum content variability, observed across different batches, has been shown to affect cell function and interaction with drug molecules.2,3 Researchers may try to minimize variability by rigorous serum-batch screening. However, such screening processes can be complicated, costly, time consuming, and subjective. It is thus recommended to use the same batch of serum throughout a study1, since screening cannot always ensure equivalency between lots of serum, and thus, experimental reproducibility.

Serum and other human- and animal-derived components contain a myriad of extracellular vesicles (EVs), including exosomes.4,5 The presence of these EVs in cell cultures can impact experimental outcomes. For instance, studies have shown that FBS-derived EVs enhance the growth of breast carcinoma cells6 or contaminate EVs of interest isolated from cell cultures7,8. Using animal component- and EV-free reagents can reduce experimental artifacts caused by contaminating EVs.

FBS is like a big dark cloud over our heads, not knowing what’s real and what’s not.

Another major concern with serum and other animal-derived components is the risk of contamination with viruses, mycoplasma, etc. A recent metameric assessment of 26 bovine serum samples from 12 different manufacturers indicated viral contaminations in all but one of the samples.9 Other human- or animal-derived components included in cell culture media can harbor similar problems and more researchers are coming to the conclusion that animal component-free media should be the preferred choice when possible.10 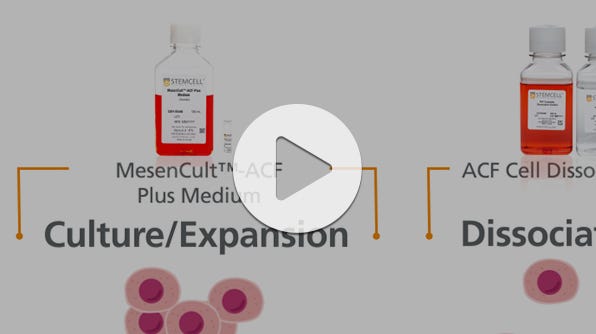 MSCs are by nature very heterogeneous, and very sensitive to culture conditions. To minimize experimental variability and artifacts caused by serum and other animal-derived components, we have developed a serum- and animal component-free MesenCult™ ACF workflow that can support your research throughout MSC derivation, expansion, and chondrogenic differentiation. This workflow also includes the STEMdiff™ Mesenchymal Progenitor Kit for the generation of mesenchymal progenitor cells (MPCs) from human pluripotent cells, i.e. induced pluripotent stem (iPS) and embryonic stem (ES) cells.

What are the biggest challenges you face as an MSC researcher? 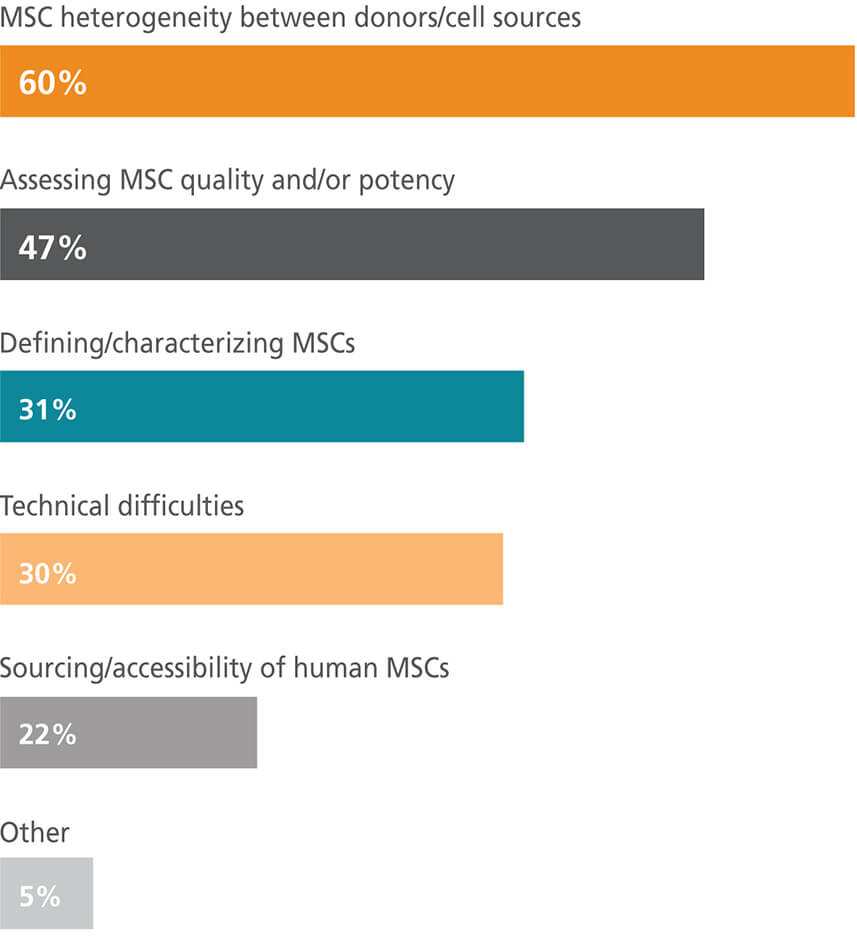 MSC is an umbrella term that has been used to refer to cells of different tissue origins and variable properties. It is becoming clearer that cells referred to collectively as MSCs have different cell transcriptomes and differentiation capacities when isolated from different tissues.11–14 Currently, many leaders in the field advocate for clearer nomenclature and suggest specifying the tissue of origin in publications.15–18 Compounding the concerns around cell heterogeneity is the observation that cell properties can vary in MSC populations isolated from the same tissue from different donors or even the same tissue from one donor.19,20

Researchers must be alert and creative to make sure the cells they are using are consistent across a study.

One option to minimize tissue/donor variation is to use MSCs derived from human pluripotent stem cells (hPSCs) which are a more homogenous cell source with the potential for indefinite expansion.21 MSCs derived from human ES22 and iPS23 cells have been shown to have similar in vitro and in vivo properties to MSCs derived from adult tissues. hPSCs can potentially provide an inexhaustible source of MSC generation for research and clinical purposes.24 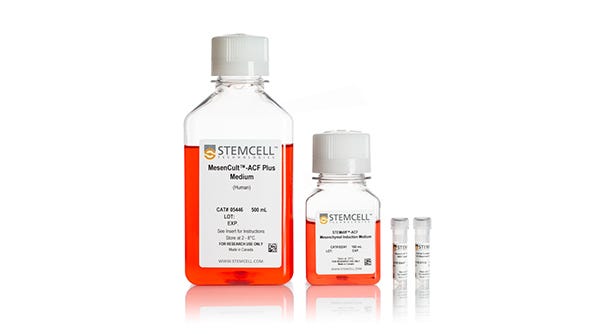 The complete animal component-free STEMdiff™ Mesenchymal workflow is optimized for the differentiation and culture of mesenchymal progenitor cells (MPCs) from ES and iPS cells. Unlike MSCs, MPCs are not derived from the stromal compartment of tissues and exhibit reduced heterogeneity when compared to their primary cell counterparts.

What is your primary concern when choosing MSC culture media or reagents? 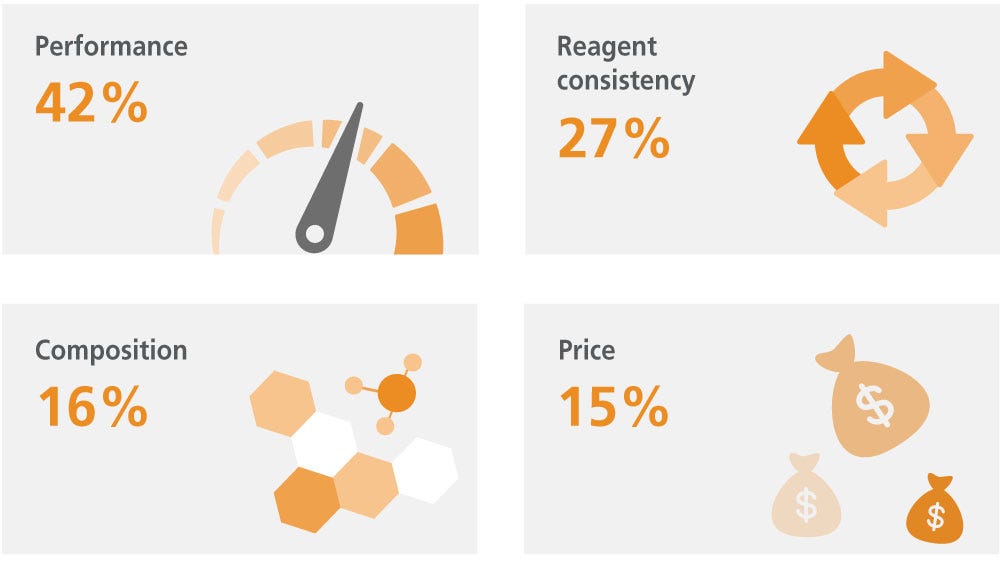 Due to MSCs' inherent heterogeneity and sensitivity to culture conditions, settling on a standardized culture system and resultant phenotype has proven challenging. MSCs are so sensitive to variability in culture conditions that cells growing in the center of the culture plate can display different properties from those in the periphery.25

There has been a tendency to choose culture systems and/or conditions based on high performance (high-cell-expansion rate or differentiation capacity) characteristics alone, with disregard for the importance of consistency and reproducibility. For example, some researchers prefer media/serum lots that promote rapid cell growth, but overlook the impact on other cell characteristics that may change with culture conditions. It is important to keep in mind, especially when working with sensitive, heterogeneous cells such as MSCs, that although media performance is crucial when culturing MSCs, the need for consistency in culture systems cannot be discounted. As discussed earlier, serum and other animal components contribute significantly to experimental variability and culture inconsistency. Using animal component-free products can minimize reproducibility issues and save researchers time and money on serum batch/reagent screening. 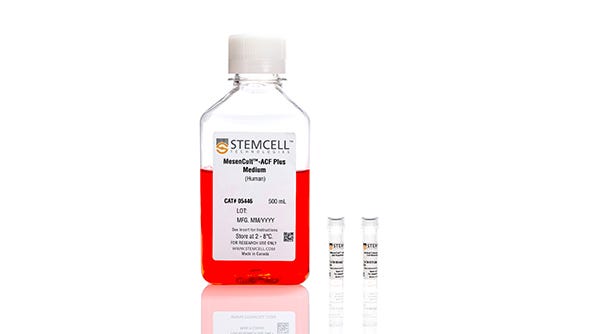 MesenCult™-ACF Plus Medium allows you to derive and expand your MSCs consistently without the use of serum or other animal-derived products, while maintaining performance. MSCs cultured in this medium maintain in vitro trilineage differentiation and express cell surface markers as defined by the International Society for Cell Therapy (ISCT). MesenCult™-ACF Plus is also free of contaminating EVs, making it the ideal choice for researchers studying and working with MSC-derived EVs.

What is your preferred term for referring to MSCs? 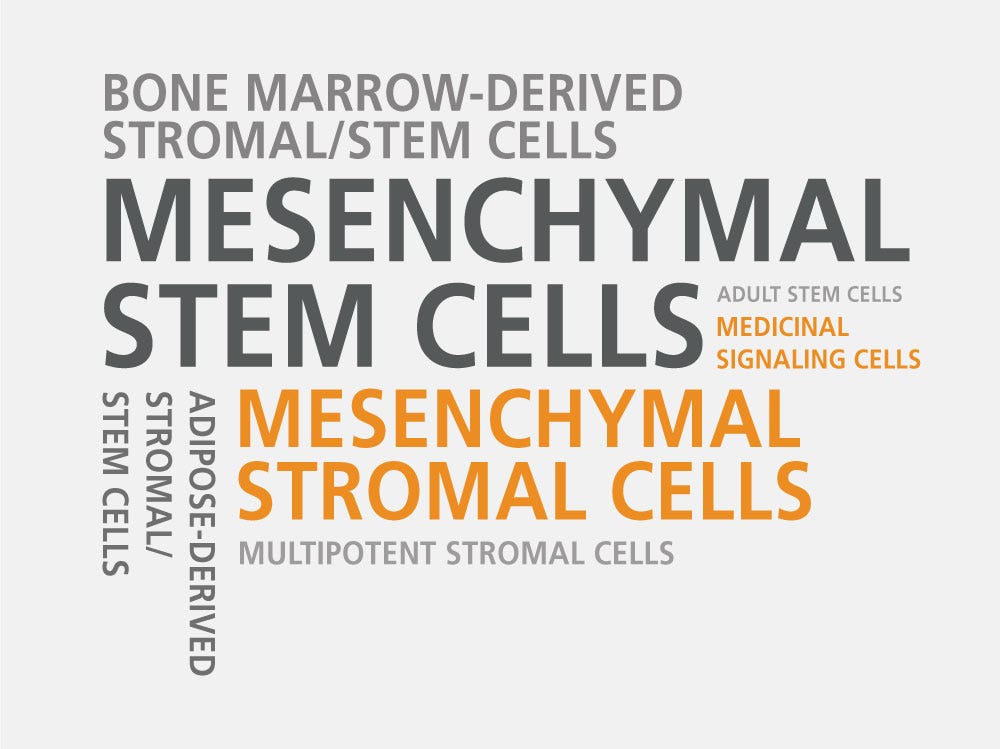 Mesenchymal stem cells, mesenchymal stromal cells, and medicinal signaling cells are among the many terms used to refer to MSCs. “Mesenchymal stem cell” was originally coined by Arnold Caplan in 199127 and continues to be the most common term used to describe MSCs. However, many believe that using this term has caused confusion and that it does not accurately reflect the source and properties of the cells. Leaders in the field have proposed different names to address this discrepancy. In 2017, Caplan proposed “medicinal signaling cells” based on the new findings related to role of the MSC secretome in their therapeutic potency.28–29 Caplan urged the community to stop the use of the term “mesenchymal stem cells” to avoid further misleading the public by implying that MSCs are stem cells.30 Other groups believe that—since it has been shown that subsets within bone marrow-derived MSCs can be multipotent in vivo and even establish hematopoietic niches31—the term “stem” is in fact the correct way to refer to MSCs.

Call them MSCs, but please not stem cells.

To address the controversies about MSC nomenclature, the ISCT MSC committee has recently released a commentary18, recommending the use of “mesenchymal stromal cells" for most instances. In its 2019 Cytotherapy commentary article, the ISCT MSC committee highlights the need for “more rigorous scientific examination, discussion, discourse". While the committee believes that the term “mesenchymal" is still appropriate, it recommends specifying the tissue of origin when reporting data (e.g. bone marrow-derived MSCs). More importantly—unless both in vitro and in vitro functional assays demonstrate stemness—researchers are encouraged to avoid the use of the term “stem" when referring to MSCs. Using a matrix of functional assays32,33 can more accurately determine characteristics for this heterogeneous cell group and provide insights into its stemness or lack thereof. For more information on MSC nomenclature debates visit Mesenchymal Stromal Cell Debates and Updates.

In conclusion, the results of this survey reflect some of the challenges MSC researchers face and highlight potential areas of improvement in the field. Continuous open discussions are crucial and encouraged as the community tackle these challenges and expands our knowledge of MSCs. Full survey results can be viewed here.

See the full MSC survey results in this visual summary.

Keep abreast of the latest discussions in the field, including the debates around the nomenclature and characterization of MSCs. 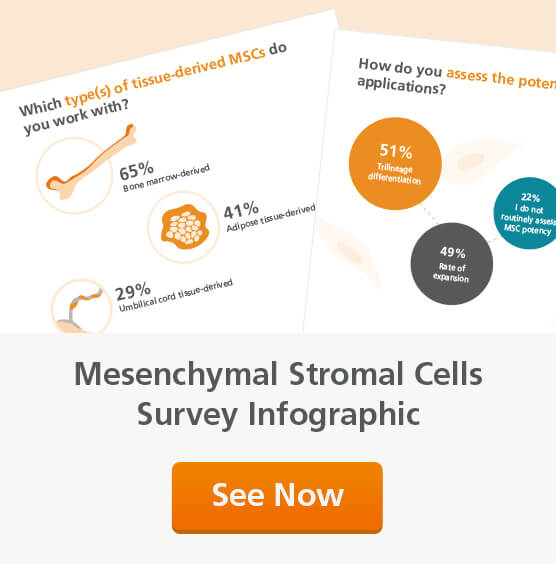