The EasySep™ Human Monocyte Enrichment Kit is designed to isolate monocytes from fresh or previously frozen peripheral blood mononuclear cells by negative selection. Unwanted cells are targeted for removal with Tetrameric Antibody Complexes recognizing non-monocyte cells and dextran-coated magnetic particles. The cocktail also contains an antibody to human Fc receptor to prevent nonspecific binding of monocytes. Labeled cells are separated using an EasySep™ magnet without the use of columns. Desired cells are poured off into a new tube. For applications in which CD16+ cells are not removed, we recommend the EasySep™ Human Monocyte Enrichment Kit without CD16 Depletion (Catalog #19058). 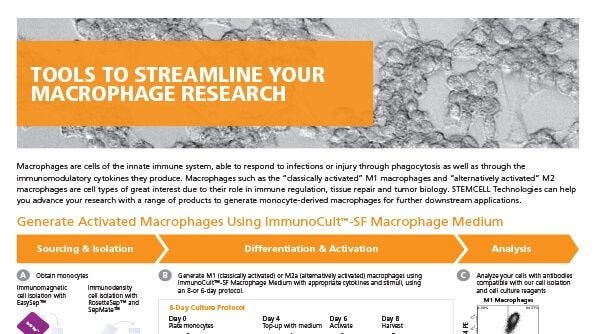 A mysterious feature of Crohn's disease (CD) is the extra-intestinal manifestation of creeping fat" (CrF) defined as expansion of mesenteric adipose tissue around the inflamed and fibrotic intestine. In the current study we explore whether microbial translocation in CD serves as a central cue for CrF development. We discovered a subset of mucosal-associated gut bacteria that consistently translocated and remained viable in CrF in CD ileal surgical resections and identified Clostridium innocuum as a signature of this consortium with strain variation between mucosal and adipose isolates suggesting preference for lipid-rich environments. Single-cell RNA sequencing characterized CrF as both pro-fibrotic and pro-adipogenic with a rich milieu of activated immune cells responding to microbial stimuli which we confirm in gnotobiotic mice colonized with C. innocuum. Ex vivo validation of expression patterns suggests C. innocuum stimulates tissue remodeling via M2 macrophages leading to an adipose tissue barrier that serves to prevent systemic dissemination of bacteria."
View publication
The 10q26 Risk Haplotype of Age-Related Macular Degeneration Aggravates Subretinal Inflammation by Impairing Monocyte Elimination. F. Beguier et al. Immunity 2020 aug

A minor haplotype of the 10q26 locus conveys the strongest genetic risk for age-related macular degeneration (AMD). Here, we examined the mechanisms underlying this susceptibility. We found that monocytes from homozygous carriers of the 10q26 AMD-risk haplotype expressed high amounts of the serine peptidase HTRA1, and HTRA1 located to mononuclear phagocytes (MPs) in eyes of non-carriers with AMD. HTRA1 induced the persistence of monocytes in the subretinal space and exacerbated pathogenic inflammation by hydrolyzing thrombospondin 1 (TSP1), which separated the two CD47-binding sites within TSP1 that are necessary for efficient CD47 activation. This HTRA1-induced inhibition of CD47 signaling induced the expression of pro-inflammatory osteopontin (OPN). OPN expression increased in early monocyte-derived macrophages in 10q26 risk carriers. In models of subretinal inflammation and AMD, OPN deletion or pharmacological inhibition reversed HTRA1-induced pathogenic MP persistence. Our findings argue for the therapeutic potential of CD47 agonists and OPN inhibitors for the treatment of AMD.
View publication
Distinct Effects of Immunosuppressive Drugs on the Anti-Aspergillus Activity of Human Natural Killer Cells. S. Schmidt et al. Pathogens (Basel, Switzerland) 2019 nov

As the prognosis of invasive aspergillosis remains unacceptably poor in patients undergoing hematopoietic stem cell transplantation (HSCT), there is a growing interest in the adoptive transfer of antifungal effector cells, such as Natural Killer (NK) cells. Because immunosuppressive agents are required in most HSCT recipients, knowledge of the impact of these compounds on the antifungal activity of NK cells is a prerequisite for clinical trials. We, therefore, assessed the effect of methylprednisolone (mPRED), cyclosporin A (CsA) and mycophenolic acid (MPA) at different concentrations on proliferation, apoptosis/necrosis, and the direct and indirect anti-Aspergillus activity of human NK cells. Methylprednisolone decreased proliferation and increased apoptosis of NK cells in a significant manner. After seven days, a reduction of viable NK cells was seen for all three immunosuppressants, which was significant for MPA only. Cyclosporin A significantly inhibited the direct hyphal damage by NK cells in a dose-dependent manner. None of the immunosuppressive compounds had a major impact on the measured levels of interferon-$\gamma$, granulocyte-macrophage colony-stimulating factor and RANTES (regulated on activation, normal T cell expressed and secreted; CCL5). Our data demonstrate that commonly used immunosuppressive compounds have distinct effects on proliferation, viability and antifungal activity of human NK cells, which should be considered in designing studies on the use of NK cells for adoptive antifungal immunotherapy.
View publication
View All Publications