The VU-1D9 antibody reacts with the human epithelial cell adhesion molecule (EpCAM or CD326), an ~40 kDa type I transmembrane glycoprotein, which functions as a homophilic and Ca++-independent adhesion molecule. Binding of the VU-1D9 antibody requires the presence of the extracellular EGF-1 domain of EpCAM. EpCAM has roles in several cellular processes, including signaling, migration, proliferation, and differentiation. It is expressed early during erythrogenesis and has been identified as a stem cell marker. The EpCAM protein is found on the basolateral membrane of most normal epithelial cells and is highly expressed in bone marrow, colon, and lung. EpCAM is not expressed on mesothelial cells or mesotheliomas, and so is widely used as a diagnostic marker to distinguish mesothelioma and carcinoma cells, as well as serving as a target for immunotherapeutic treatment of carcinomas. The VU-1D9 antibody has been used to identify and isolate circulating tumor cells.
Primary Antibodies
CD326 (EpCAM)
EGP2, EpCAM, Epithelial cell adhesion molecule, ESA, TACSTD1, TROP-1
Human
Unconjugated
Mouse
Mammary Cells
Human
Cell Isolation, Flow Cytometry, Immunohistochemistry
Epithelial Cell Biology, Stem Cell Biology
VU-1D9
4072
IgG1, kappa
View More View Less 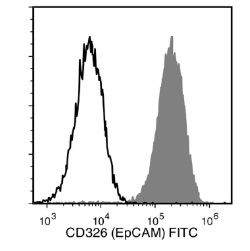