mTeSR™1 (Catalog #05850) is the most-published medium for the culture of human embryonic stem (ES) and induced pluripotent stem (iPS) cells in serum-free and feeder-free conditions. Established protocols using mTeSR™1 require daily medium replacement, with the accepted exception to allow one double-volume medium change followed by a single day without feeding each passage, causing researchers to routinely work at least one day on weekends.

To establish a completely weekend-free work schedule, we developed a protocol that involves routine passaging on Fridays and eliminates feeding on Saturdays and Sundays (when colonies are small). Development of this 7-day passaging schedule required optimization of the size and density of aggregates seeded. We validated this 7-day passaging protocol with cells cultured in mTeSR™1 and TeSR™-E8™ (Catalog #05940). Corning® Matrigel® hESC-qualified matrix (Matrigel®) or the defined protein Vitronectin XF™ (Catalog #07190; developed and manufactured by Primorigen Biosciences, Inc.) were used as matrices. Cultures maintained using this weekend-free protocol retained the same high-quality standard typically seen with TeSR™ media.

We compared the ability of our newly developed weekend-free 7-day passaging protocol (Figure 1) to support long-term maintenance of human ES and iPS cells against a standard 7-day passaging protocol where medium was replaced 6 of 7 days with a double-volume feed on Saturdays and no feed on Sundays. In both cases, cells were routinely passaged on Fridays using the same protocol (See Protocol Tips & Tricks). Experiments were performed using H1 or H9 human ES cells, or WLS-1C or WLS-4D1 human iPS cells maintained in either mTeSR™1 or TeSR™-E8™ on Matrigel® unless otherwise indicated. For each experiment, duplicate wells were independently maintained in parallel for at least 10 passages.

By following a routine 7-day passaging schedule on Fridays, weekend work is eliminated as medium replacement is not required on either Saturdays or Sundays.

(A, B) Expression of pluripotent stem cell markers OCT-4 and TRA-1-60 was high after 10-11 passages for cells maintained in mTeSR™1 (A) or TeSR™-E8™ (B) using standard (gray) or weekend-free (orange) protocols (average of duplicate wells shown). (C) Representative FACS examples of weekend-free-cultured cells show co-staining of TRA-1-60 and SSEA-3 on nearly all cells (left: H1, mTeSR™1; right: H9, TeSR™-E8™).

Another important indicator of culture quality is the ability to maintain high rates of expansion during long-term culture without the acquisition of cytogenetic abnormalities. Cultures maintained without weekend feeding had similar expansion rates (Figure 4) and colony sizes to those following the standard 7-day passaging protocol with a weekend feed. This indicates that the reduced feeding schedule of the weekend-free 7-day passaging protocol does not impair the growth of the cultures. The cells also retained a normal karyotype (not shown) after long-term (> 10 passages) weekend-free maintenance in either mTeSR™1 or TeSR™-E8™. 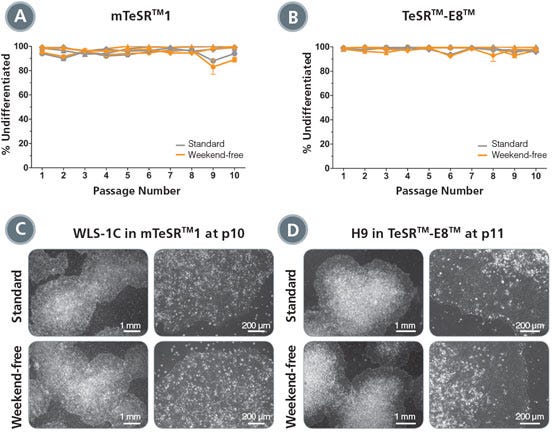 (A, B) The percentage of colonies with undifferentiated morphology at each passage was determined by visual assessment of cultures of H1 or H9 (circles), WLS-1C (triangles) or WLS-4D1 (diamonds) cells maintained in mTeSR™1 (A) or TeSR™-E8™ (B) using standard (gray) or weekend-free (orange) protocols. All conditions showed consistently high percentages of undifferentiated colonies over 10 passages. (C, D) Representative images show comparable undifferentiated colony morphology in standard and weekend-free conditions.

Human ES or iPS cells were maintained in (A) mTeSR™1 or (B) TeSR™-E8™ using standard (gray) or weekend-free (orange) protocols. Fold expansion at each passage was determined by counting the number of aggregates harvested after 7 days of culture, divided by the number of aggregates seeded. Each bar represents the average of duplicate wells, averaged over 10 passages. 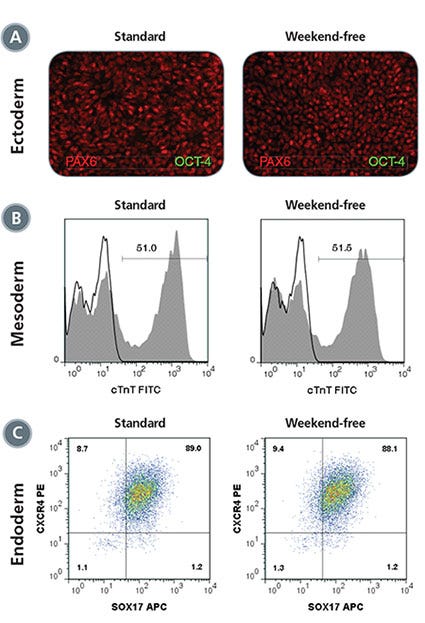 Figure 5. Ability to Differentiate to Three Germ Layers is Retained in Cells Cultured with the Weekend-Free Protocol

Cells cultured on either matrix using the weekend-free protocol had high expression of OCT-4 (Figure 6A), TRA-1-60, SSEA- 3, and SSEA-4 (not shown). Excellent morphology typical of highly undifferentiated human ES cells was also observed in all conditions (Figure 6B). The morphology of colonies on Vitronectin XF™ was characteristically more compact and rounded using either protocol (Figure 6C). A similar expansion rate was observed in all conditions (Figure 6D). Normal karyotype was confirmed after 10 passages without weekend feeding (Figure 6E). 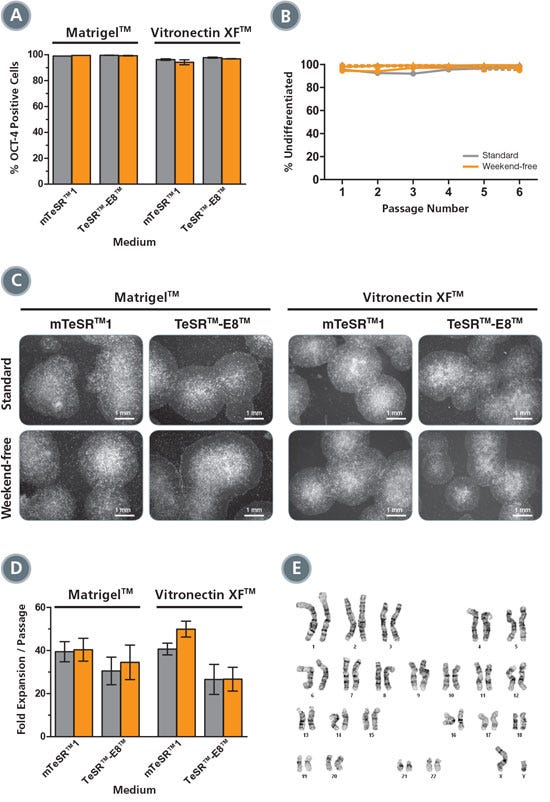 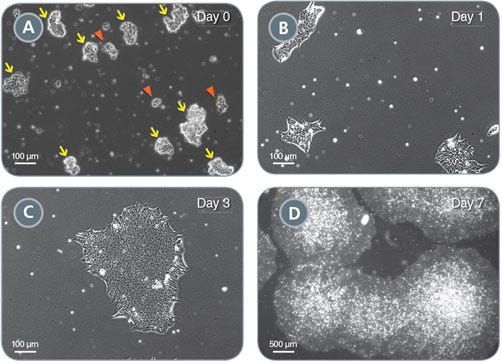 By manipulating aggregate size, culture density and passaging day, it is possible to maintain human ES or iPS cell cultures without working on the weekend. This requires the plating of small cell aggregates at low densities to establish a regular 7-day passaging schedule on Fridays. Once this routine is established, cultures can tolerate two full days (the weekend) without feeding, and cells from these cultures will maintain undifferentiated morphology, pluripotent cell marker expression and high expansion rates.