Investigating the Role of Regulatory T Cells in Neurotropic Infections 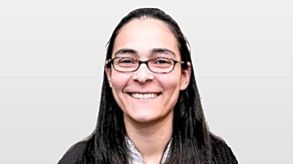 Andreia Costa works in Dr. Lund's lab investigating the role of regulatory T cells (Tregs) in neurotropic infections, particularly West Nile virus. The Lund lab uses both mouse models and human samples to elucidate the basic mechanisms of immunity in the context of viral infections, including genital HSV-2, influenza, West Nile virus, and HIV. The ultimate goal of their research is to improve interventions - both vaccines and therapies - for various clinically important viral infections.

As an undergraduate student, I participated in a summer fellowship at the Woods Hole Oceanographic Institution, working on characterizing the ecological dynamics of freshwater microbes within a local aquifer. Although my interests have changed since then, I became hooked on the scientific process, and my plans to attend medical school were supplanted by a greater interest in the pursuit of a scientific research career.

2. Who is your scientific idol?

One of my first research experiences was as an assistant in a neuroscience lab that worked on human Pavlovian conditioning. It was there that I was introduced to the works of Oliver Sacks and VS Ramachandran. Sacks and Ramachandran both take a very creative approach to their experimental designs and I admire how elegant and deceptively simple those experiments often seem at first glance. In addition, their work has led them both to look at long-standing scientific problems in new ways and to make insightful conclusions from rare patient groups. They have provided a model for conveying their findings in a clear and approachable manner that I hope to emulate.

3. What is your role in the Lund lab?

My graduate studies research focuses on the role of Tregs in neurotropic infections, in particular West Nile Virus. Our aim is to better understand the mechanisms of intrinsic viral sensing by Tregs through our study of the cytosolic RNA sensor adaptor protein, MAVS (mitochondrial antiviral-signaling protein). In addition, we are investigating the effects of Treg VLA-4 (very late antigen 4) protein expression on the development of West Nile Virus specific memory responses.

1. In your opinion, what has been the most important advancement in the field in the last five years?

Tregs have traditionally been studied for their role as guardians against autoimmunity. In addition, the role of Tregs in a variety of bacterial and viral infections, both as mitigators of disease and as suppressors of effective immune responses, is increasingly recognized. However, the past five years has seen a growing appreciation for the effect of the microbiota, both skin and gut, on the development and maintenance of Tregs. These findings have helped underscore the enormous impact of the composition of natural flora on health and disease.

2. Where is Treg research heading?

Treg-eliciting vaccines have remained elusive. Autoimmune conditions and some infections that have been shown to be dependent on the mitigating effects of Tregs would benefit from the development of a method to elicit targeted antigen-specific Tregs. For several years, the vaccine field has been steadily moving away from empirical approaches and towards more rational design methodology. With a growing body of data on the development and activation of Tregs, I hope that approaches that are being applied to the design of other T cell-mediated vaccines will be used to elicit antigen-specific Tregs.

3. What are the technical challenges currently facing the Treg field?

Several different origins have been described for Tregs. Naturally-derived Tregs (nTregs) also known as thymically-derived Tregs (tTregs), develop in the thymus as an outgrowth of the negative selection process. Peripherally-derived Tregs (pTregs) arise in the periphery from CD4 +FoxP3- T cells in response to foreign antigens that are ingested or that are part of the natural flora of the gut. Finally, induced Tregs (iTregs) are those Tregs that arise in the presence of transforming growth factor β (TGFβ), generally in culture conditions. Although several markers have been proposed to identify each of these populations, I hope that more definitive and consistent markers will be elucidated in the coming years.

1. Why does your lab use EasySep™?

Our lab had been using column-based enrichment kits for several years, however, we were not satisfied with the purity of enriched cells or the time commitment required. Tregs are a relatively small proportion of CD4+ T cells, which necessitated pooling of several mice in order to elute enough cells for our transfer studies. kits work well for enrichments that require speed and accuracy, and we have found that they handle large starting cell numbers more easily and result in a higher output of the sought after Treg portion.

2. How has EasySep™ enabled your lab's research?

We now use a variety of kits, including CD25 positive selection kits for Treg transfer studies, CD8+ negative selection kits for adoptive transfers and also kits for dendritic cell enrichment. The purity of cells to be transferred is often close to that of a flow cytometry sort, in a fraction of the time. When sorting is required, we often enrich with an EasySep™ kit first to decrease sorting time, which in turn results in increased viability of our cells.

Other members of the lab are working with human cells and my success with the mouse EasySep™ kits has garnered their trust for using EasySep™ in their own experiments. Human cell samples can be hard to source and so it is important that every experiment starts off successfully. The EasySep™ kits have provided a good base in those studies.

On the role of Tregs in neurotropic infections

Neurotropic viral infections are caused by viruses that infect the central nervous system (CNS), such as West Nile virus (WNV) and Herpes Simplex Virus (HSV)1. Although there is limited recruitment of peripheral immune cells into the CNS, these neurotropic viruses also encounter peripheral host immunity prior to their arrival in the CNS. Both CD8+ and CD4+ T cells are required for protection against WNV infection, and reduced proportion of regulatory T cells (Tregs) have been associated with symptomatic WNV infection2. The Lund lab has reported that Tregs play a dual role in WNV infection: they limit effector T cell response in the CNS at the time of infection, and promote the retention of memory T cells in the CNS post-infection3. In addition, Tregs have also been shown to play a role in other neurotropic infections, including HSV4 and Measles virus5. A better understanding of the role of host immunity against neurotropic viruses will hopefully open new directions for novel therapies against them.

Regulatory T cells (Tregs) are a subset of immune cells that are capable of suppressing inflammation and autoimmunity. Since its discovery, the use of Tregs in the clinic has been proposed as a promising therapeutic approach for inflammatory and autoimmune diseases. Their ability to suppress in an antigen specific manner without wide-spread immunosuppression is especially attractive in an immunotherapy standpoint. More recently, strategies to induce antigen-specific Tregs in vivo for the prevention of inflammatory or autoimmune diseases have been explored. For example, the administration of strong T cell receptor ligands at a subimmunogenic dose has been shown to generate a stable population of antigen-specific Tregs6. Furthermore, co-vaccination of an islet antigen with CTLA-4 ligand can induce protective Tregs in a mouse model of type 1 diabetes7. The choice of adjuvants also has an effect in the ability of a vaccination protocol to promote Treg function8. With more research, Treg-eliciting vaccines can perhaps be used in the future for patients who are at risk of developing autoimmunity. 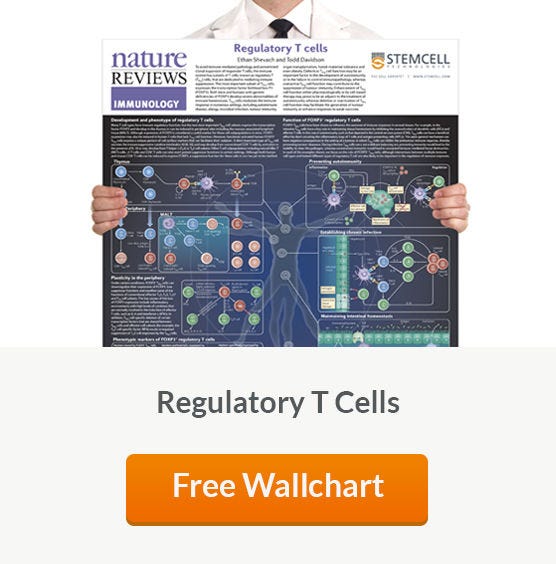