Vertebrates have a highly evolved, closed circulatory system consisting of a distinct and dynamic network of blood vessels

Vertebrates have a highly evolved, closed circulatory system consisting of a distinct and dynamic network of blood vessels. The lumen of each blood vessel is surrounded by a thin layer of endothelial cells (ECs) supported by a basement membrane and mural cells (pericytes and smooth muscle cells). ECs form the physical interface between the blood and surrounding solid tissues, and as such, regulate physiological events including vasodilatation and vasoconstriction, blood coagulation, nutrient delivery, gas exchange, and the homing of regulatory cells.1,2 In the adult, the formation of new blood vessels occurs via angiogenesis, arteriogenesis, and vasculogenesis.3,4 These processes are driven by the proliferation, migration, and remodeling of ECs from pre-existing vessels (angiogenesis and arteriogenesis) or the differentiation of progenitor cells derived from mesodermal precursors (vasculogenesis).5-8

The progenitor cells that are able to differentiate into functional endothelial cells and sustain vasculogenesis are broadly called endothelial progenitor cells (EPCs). Asahara et al10 initially identified and isolated a putative EPC in adult human peripheral blood. Since then, distinctly different cell populations have been isolated and called EPCs.9,11 These cell populations have subsequently been shown to improve vascular function through two principal mechanisms (i) actual incorporation into injured endothelium with formation of a functional blood vessel (inosculation)12 and/or (ii) local secretion of proangiogenic factors with a paracrine effect on the cells actually forming the vessel.13

Given the potential of such a progenitor cell to treat a variety of diseases, many studies in the last fifteen years have aimed to isolate and characterize them. EPCs have also been studied as biomarkers for cardiovascular diseases and proposed as a potent cell-based therapy for their capacity to stimulate vascular repair in physiological and pathological conditions.5,14-15 A summary of different cell populations often referred to as EPCs is given in Table 1.

Three different populations of putative human EPCs, with a variety of names in the literature, have been defined using four cell culture and cell sorting protocols:

CACs are obtained from the low density mononuclear cell (MNC) fraction of human peripheral blood or cord blood. Cells are plated on fibronectin-coated plates and incubated with a cocktail of cytokines.16 After 4-7 days in culture, the non-adherent cells are removed and the remaining cells are examined for their ability to take up acetylated low-density lipoprotein (AcLDL) and to bind to Ulex europaeus agglutinin1 (lectin), both considered to be hallmarks of EC function. CACs are further characterized by their morphology, adhesion to fibronectin, and cell surface protein expression. The isolated cells display pro-angiogenic activity both in vitro (by secretion of angiogenic cytokines) and in vivo, but lack the capacity to inosculate into a new blood vessel.

Flow cytometric analysis was used in 1997 by Asahara and colleagues to identify CD34+KDR+ circulating cells as putative endothelial progenitor cells. CD34+ KDR+ cells cultured on fibronectin for seven days express high levels of endothelial antigens such as CD31, Tie-2, and E selectin, and when injected into a mouse in a model of hindlimb ischemia are able to migrate to sites of vascular injury and to target vessels. Despite the fact these two antigens have continued to be used as markers for circulating cells with vascular reparative properties, it was not demonstrated that the infused cells directly formed new blood vessels.10

The loss of CD133 expression was proposed as a marker to distinguish EPCs from mature endothelial cells.5 However, it was later demonstrated that triple positive CD34+ KDR+CD133+ cells do not form endothelial colonies in vitro but do form hematopoietic colonies.18 Nor do these triple positive cells form capillary-like structures on Matrigel™. Interestingly, CD34+CD45- cells do form endothelial colonies and capillary-like structures in the respective assays, suggesting that the true EPC may express CD34 and lack expression of CD45.17

CFU-Hill are also obtained from the MNC fraction of peripheral blood. MNCs are plated on fibronectin-coated dishes for two days, after which the non-adherent cell population, containing the cells of interest, is removed and replated once more on fibronectin-coated plates. After three days, positive colonies are identified as having a central core of “round” cells, with more elongated “sprouting” cells at the periphery (See page 206, Figure 1). The unique colonies that are formed in this five day assay are referred to as Colony-Forming Unit-Hill colonies (CFU-Hill) or sometimes CFU-EC. Immunohistochemical staining has confirmed that cells generated in this assay express the endothelial cell markers von Willebrand factor, VEGFR2 and CD31, but they lack the capability to form new vessels in vivo. In healthy individuals, the number of colonies generated in this assay correlates inversely with the Framingham cardiovascular risk score and positively with vascular function, as measured by flowmediated brachial artery reactivity.14

When ECFCs are plated in collagen/ fibronectin gels and implanted in NOD/SCID mice, they form neovessels comprised of human endothelial cells. Importantly, ECFCs have a demonstrated capacity to enhance revascularization when injected in animal models of ischemia.19 They appear to synergize with CFU-Hill-derived cells and CAC to enhance revascularization of ischemic limbs in immunodeficient mouse models and to enhance wound healing in vivo.20 CACs, including CFU-Hill-derived cells, and ECFCs have all been considered EPCs, and it is not completely understood which cell type contributes to what extent in different stages of vascular repair. Both CACs, able to secrete growth factors locally, and ECFCs, able to inosculate into host tissue and become part of a new vessel, may have therapeutic potential.

Rodent EPCs are believed to be derived from the bone marrow compartment21 and can be isolated using a combination of cell surface markers including stem cell antigen 1 (Sca1), cKit, Flk1, CD31, Tie2 and CXCR4, CD133, or CD144 expression.22-24 The general protocol for isolating and defining CACs in the mouse system follows that of the human system. Cells are selected through adhesion to fibronectin plates and identified after four to seven days in culture by the ability to take up acetylated LDL and bind to lectin. Mouse CACs are recognized to be myeloid and pro-angiogenic. ECFC have not been isolated from mouse peripheral blood at the single animal level; whole blood pooled from four to six mice produces only one ECFC, and this in less than 30% of attempts.25

Recently, resident microvascular endothelial progenitor cells (RMPEC) have been successfully isolated from rat lung.26 These cells are equivalent to human ECFCs in that they display neovasculogenic capacity and a hierarchy of cells which could be distributed along the tissue structure.27

To improve the in vivo functionality of ECFCs, mesenchymal stem cells (MSCs), adipose stromal cells (ASCs), and smooth muscle progenitor cells (SMPCs) have been tested in in vitro co-culture systems and in in vivo experiments. These cells have been reported to stabilize and enhance human endothelial-derived vessels.19,28 For example, Melero Martin et al29 showed that co-implantation of ECFCs with either bone marrow-derived or cord blood-derived MSCs into immunodeficient mice resulted in the formation of vascular networks after one week, compared to no microvessel formation when ECFC were implanted alone. The extent of the engineered vascular networks was highly influenced by the ratio of ECFCs to MSCs, with a progressive increase in vessel density and consistency of vascularized implants as the contribution of MSCs rose to 60%. Tracktuev and colleagues30 demonstrated that ASC synergize with human ECFCs in de novo formation of vascular networks in collagen matrices implanted into mice. More recently, the co-transplantation of ECFCs and SMPCs was shown in a mouse ischemic hind limb model to induce robust in vivo neovascularization, as well as improved blood perfusion and tissue repair.31 These studies support a therapeutic neovascularization strategy incorporating more than one type of autologous progenitor derived from adult peripheral and cord blood.

ECFCs co-cultured with biologically compatible material have been used as tissue engineered structures for replacement of vascular structures. Development of functional vascular networks is not only important for treatment of ischemia such as that arising from diabetic complications and cardiovascular disease, but also for tissue engineering to repair and regenerate damaged or diseased tissue.32,33

Scientists continue to search for the best biomaterial to mimic the extracellular matrix and serve as a scaffold for tissue regeneration. The ideal matrix will improve cell survival and guide appropriate vessel formation. For example, collagen fibril density and stiffness has a significant effect on the formation of functional blood vessels by ECFCs in vivo.34,39 Some materials have been functionalized, since their properties are not always ideal for tissue engineering applications. For example, Melero-Martin and colleagues demonstrated that photo-crosslinkable methacrylated gelatin (GelMA) hydrogels are compatible with ECFC-based vascular morphogenesis.35 GelMA hydrogels, when injected with liquid, polymerize rapidly, which limits dissemination at the implantation site and eliminates the need for pre-polymerizing the constructs and for surgical incisions. This results in a better integration with the surrounding host tissue and better vascularity (~3 fold) in injected constructs than in constructs that are polymerized ex vivo prior to implantation.36

Biological Role and Potential Use of ECFCs in Human Diseases

The concentrations and functionality of various circulating EPCs have been enumerated and correlated to disease states as biomarkers for disease detection or disease stage.37-39 The notion that EPC dysfunction exists in certain patient categories may have implications for currently explored cell-based clinical strategies to enhance tissue perfusion in patients with ischemic coronary and peripheral artery disease. For example, defects in CD34+KDR+ function have been shown in some diabetic patients, and thus therapies based on restoring EPC function have been proposed.40 To date, clinical trials using putative EPCs have been conducted in patients with heart disease, diabetes, peripheral arterial disease, pulmonary disease, and cancer. The therapeutic use of these cells appears to be safe but also of limited efficacy and rarely provides a durable response, thus limiting the clinical application of autologous stem cells to treat vascular diseases. ECFC cell-based therapy has been primarily limited by the extremely low frequency of less than one ECFC per million nucleated cells in peripheral blood. Culture expansion of ECFCs will therefore be required for their use in cellular therapies.

Dr. Sakimoto and Dr. Marchetti discuss the potential application of human ECFCs to treat vascular abnormalities in the eye.

The original protocols for the ex vivo derivation and expansion of ECFCs depend on the presence of fetal bovine serum (FBS) or fetal calf serum (FCS) in the culture medium. Animal products can contain potentially harmful xenogeneic compounds associated with the risk of transmitting infectious agents when used in human transplantation, and also the risk of the host developing antibodies against FBS components.

Moreover, FBS and FCS contain undefined components that make standardized cell preparation very complex. Finally, in the rare instance in which a few ECFCs could be grown without serum, transcriptomic analysis reveals a broad down-regulation of genes involved in cell cycle progression and up-regulation of genes involved in stress response and apoptosis in ECFC grown without serum compared to those grown with serum.41 Therefore, researchers have looked for a way to derive and expand ECFCs in the absence of serum.

Subsequently, Yoder and colleagues showed that human umbilical cord blood plasma could replace FBS for the in vitro expansion of functional human ECFCs.43 ECFCs cultured in serum-free conditions retain their endothelial and progenitor phenotype both in vitro and in vivo. Importantly, serum-free derived ECFCs exhibit a complete hierarchy of proliferative potential, demonstrating that it is possible to expand ECFCs in serum-free conditions while maintaining their functionality.

Explore our products for endothelial research, including the EC-Cult™-XF Culture Kit for ECFC derivation and expansion. 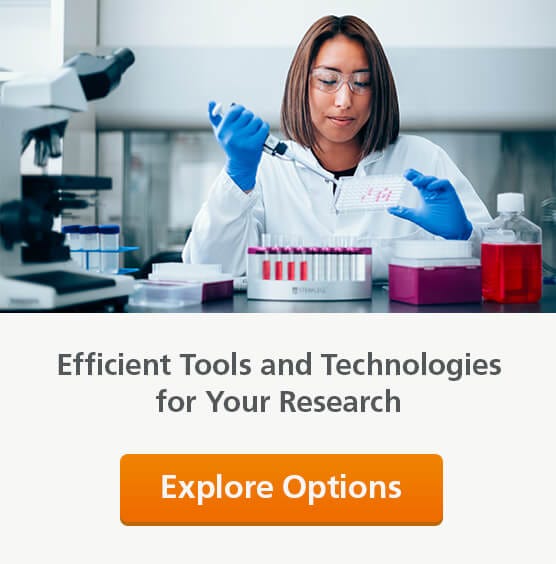