The 32D12 antibody reacts with CD24, a 35 - 50 kDa glycosylphosphatidylinositol (GPI)-linked sialoglycoprotein that is anchored to the plasma membrane and is glycosylated variably depending on cell type. The function of CD24 has yet to be fully determined but it is believed to play a role in lymphocyte development, particularly in acting as a costimulatory molecule for CD4+ T cells and in regulating B cell proliferation, activation, differentiation, and apoptosis. CD24 may also function in cell adhesion and metastasis, likely through binding of CD62P (P-Selectin). CD24 is expressed by follicular dendritic cells, and various epithelial and hematopoietic cell types, including granulocytes, erythrocytes, most B cells, and subsets of T lymphocytes. As it is expressed throughout B cell development but is lost after differentiation into the plasma cell stage, CD24 may be used as a B cell differentiation marker. Furthermore, CD24 also has the potential to be a marker for tumor prognosis and diagnosis as it is highly expressed in numerous cancers including ovarian, breast, prostate, bladder, renal, and lung, as well as neuroblastomas and various hematological malignancies. Reportedly, the 32D12 antibody recognizes an epitope that is distinct from those recognized by clones VIB-C5, VIB-E3, LC66, BA-1, ML5, OKB2 and SN3 A5-2H10.
Primary Antibodies
CD24
CD24a, Heat stable antigen, HSA, Ly-52, Nectadrin, Small cell lung carcinoma cluster 4 antigen
Human
Biotin, FITC
Mouse
B Cells
Human
Cell Isolation, Flow Cytometry
Immunology
32D12
100133941
IgG1, kappa

Reliable Antibodies for Your Research
Wallchart 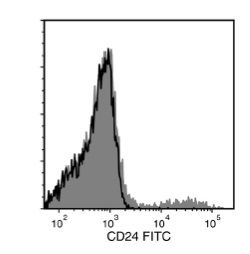 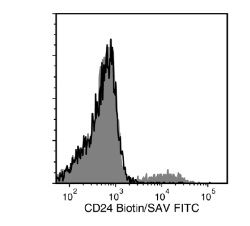 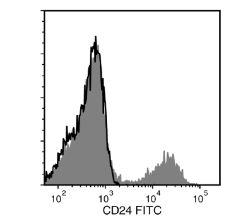