From Studying NK Cell Progenitors to Finding ILC2s in the Lungs 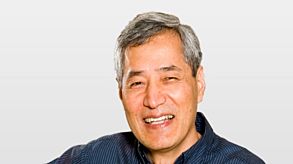 Dr. Takei is a Distinguished Scientist at the Terry Fox Laboratory within the BC Cancer Research Center in Vancouver, Canada. He received his PhD from the University of British Columbia (UBC) and completed postdoctoral training in Cambridge, England. He then returned to UBC to lead his own laboratory. Dr. Takei has over 25 years of experience in immunological research. From 1990 to 2010, his research focused on NK cells, including their surface receptors, molecular regulation and development. In 2010, he discovered a unique lymphocyte population in mouse lungs and this unique finding was later published in 20121. Today, this population of cells is termed group 2 innate lymphoid cells (ILC2s). Since then, Dr. Takei became known as one of the leading experts in ILC2 biology, and the research focus in his lab shifted towards the regulation and function of this newly discovered cell type.

1. What influenced you to become an immunologist?

My father influenced my decision. He was an engineer but wanted to become a scientist himself and supported my decision to go to graduate school and pursue a career in research. When I started, immunology was only about antibodies and lymphocytes (T and B cells), so I became interested in specializing in this new field. Immunology is fascinating because it’s very complex and there’s always something new to be discovered.

2. What is your leadership style in the lab?

I hire good students and post-docs, give general directions of their projects and let them run the projects. I have an open-office policy, but I am also available for scheduled meetings whenever needed. I have lab meetings once a week as it provides a great opportunity for everyone to get input from each other and get involved in each other’s research.

3. What do you look for in a student/post-doc?

I look at personality and intelligence and see whether they can work well with others. I also look at what their research interests are.

4. What advice you can give your trainees when they leave your lab?

I advise them to have a plan for the future and not to follow the fashion but rather “initiate” something on his/her own.

The Science: ILC2s and NK Cells

1. You have studied natural killer (NK) cells for more than 30 years. Looking back, what do you consider to be your biggest achievement?

My biggest achievement was finding and identifying a family of NK cell receptors. When we first cloned Ly-49, I was actually more interested in T cells than NK cells and I thought Ly-49 was a T cell receptor. You have to keep in mind that this was before the T cell receptor (TCR) was cloned. When we cloned Ly-49 cDNA, we found that it was a member of a large family of related genes. However, the sequence did not reveal its function, and it was challenging to decide if it was worth further investigation. When Wayne Yokoyama reported that Ly-49 is a MHC I-specific receptor on NK cells, we decided to focus on other members of the family, and showed that Ly-49 is a family of highly polymorphic NK receptors, each having distinct specificity for MHC I. That was probably my biggest contribution.

2. In 2012, your lab identified lung natural helper cells which today are known as group 2 innate lymphoid cells (ILC2). What were the critical experiments that helped you identify these new cells?

We were looking at NK cell progenitors, and found ILC2s. Then the rest just happened. We were looking at NK cell progenitors when the first natural helper (NH) cell papers came out and realized that they were very similar. We isolated “NH-like cells” from allergen-treated mouse lungs, and found that they produce type 2 cytokines, IL-5 and IL-13. We then used an in vivo model of papain-induced lung inflammation in Rag deficient mice, and specifically looked for T cell-independent type 2 inflammation.

3. Why are immunologists so excited to study ILC2s?

ILCs were missed because they are a rare population of cells, and there is no distinct marker for them. However, now that they have been identified, we are excited to study them because they provide answers to many outstanding questions. The discovery of ILC2s enabled us to connect the presence of IL-33 to the production of type 2 cytokines in processes such as thermogenesis and helminth expulsion, understand why there are allergies without specific IgE antibodies and understand how allergens lead to Th2 cell activation. ILC2s have also let us understand why some SNPs are common amongst asthmatics. For example, SNPs within the Rora gene is commonly found in asthmatics, and Rora turns out to be a critical transcription factor for ILC2 development. In addition, the discovery of ILC2s will enable us to develop new therapies (ex. ILC2 inhibitors for allergic diseases).

4. Where do you think the ILC research field is heading?

5. What is the research focus of your lab now?

The focus is ILC research. I’m trying to study mechanisms and find new ILCs that are possibly induced with different allergens (ex. house dust mites or fungal protease allergens). It would be great if we can collaborate with other local labs (ex. Drs. Ninan Abraham, Don Sin and Kelly McNagny for example).

ILC2 Isolation: Enrichment Prior to Sorting

1. What are the main challenges in studying ILC2s?

The cell number is low and we’re still lacking long term culture of ILC2s. We have to pool cells from many mice. We received a kit for ILC2 enrichment from STEMCELL. We used the enrichment kit before sorting ILC2s, which allowed us to obtain more ILC2s from fewer mice in a shorter time period. Due to this increased sorting efficiency, we were able to perform a transplant experiment, which was one of the key revision experiments that led us to our recently published paper in Immunity.2

On the Role of ILC2s in Allergic Inflammation

Innate lymphoid cells are a newly discovered group of immune cells that belong to the lymphoid lineage but lack the expression of antigen-specific receptors. Group 2 innate lymphoid cells (ILC2s) play a fundamental role in orchestrating the type 2 immune response to inhaled allergens in the lungs by interacting with other members of the immune system.3 ILC2s are activated by epithelial cell-derived interleukin-25 (IL-25), IL-33 and thymic stromal lymphopoietin (TSLP), which are released during exposure to allergens. Upon activation, ILC2s proliferate and secrete type 2 cytokines, including IL-5 and IL-13.1,3 ILC2-derived IL-13 promote the migration of dendritic cells to lymph nodes, where they can induce the differentiation of antigen-specific Th2 cells.4 ILC2-derived cytokines can also support the recruitment and activation of mast cells and eosinophils,3 and promote the production of early antibodies by B cells.5 Although they’re a part of innate immunity, recent observations suggest that ILC2s possess memory-like function: some ILC2s persist long after the resolution of lung inflammation, and respond more vigorously to a subsequent exposure to unrelated allergens.2 Put together, ILC2s are a critical subset of the innate immune system that initiate and maintain allergic inflammation.

On the Identification and Isolation of ILC2s

ILC2s are a unique group of cells with a complex phenotype. On the surface, ILC2s are defined by the absence of hematopoietic lineage markers (ex. CD3ε, CD19, CD11b, Gr-1, NK1.1, and Ter119), and presence of Sca-1, c-Kit, CD25, CD127 and ST2.3 In addition, ILC2s are rare, comprising only ~0.35% of lung lymphocytes,1 which creates a challenge for scientists to identify and isolate them. Inside the cell, the transcription factors GATA binding protein 3 (GATA-3) and RAR-related orphan receptor alpha (RORα) are required for the development, maintenance and function of ILC2s.3,6 ILC2s also constitutively express the metabolic enzyme arginase-1 (Arg1),7 which is needed to support robust ILC2 proliferation and cytokine production. Together, these factors can be used to identify and analyze ILC2s. Characteristic surface markers can be used to isolate ILC2s, but low cell number remains a major challenge in this field. As Dr. Takei mentioned above, the use of ILC enrichment kits prior to sorting enables researchers to isolate more ILC2s for downstream experiments. 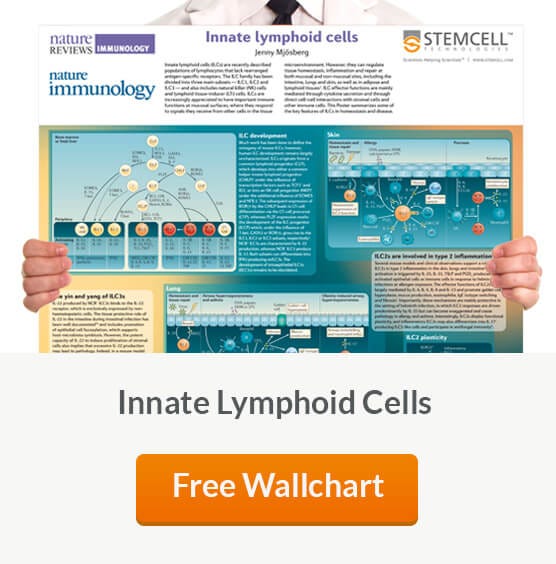