StemSpan™ Serum-Free Expansion Media, SFEM (Catalog #09600/09650) and SFEM II (Catalog #09605/09655), have been developed for the culture of human HSPCs. When used in combination with the StemSpan™ Erythroid Expansion Supplement (Catalog #02692), which consists of an optimized combination of recombinant human cytokines (SCF, IL-3 and EPO), these media selectively promote the expansion and differentiation of erythroid progenitor cells in cultures of purified CD34+ cells from human CB, BM and PB. This results in very pure populations of transferrin receptor (CD71) and Glycophorin A (CD235, GlyA) positive erythroblasts after 7 - 14 days of culture (Figure 1). Cell yields are typically higher in StemSpan™ SFEM II than in SFEM; however, both media support the generation of thousands of erythroblasts per original CD34+ cell after 7 - 14 days of culture. Results for 14-day cultures of CB-derived CD34+ cells in StemSpan™ SFEM and SFEM II are shown in Figure 2 and Table 1.

CB-derived CD34+ cells were cultured in StemSpan™ SFEM II containing Erythroid Expansion Supplement. After (A) 7 days and (B) 14 days, the cultured cells were stained with CD71 (Catalog #60106) and GlyA (Catalog #60152FI) antibodies and analyzed by flow cytometry. (A) During differentiation, the CD34+ cells progress to the CD71+ GlyA+ erythroblast stage via CD71+ GlyA- progenitors and pro-erythroblasts, which are still abundant on day 7. (B) With further culture these cells differentiate into erythroblasts and by day 14 most cells have become CD71+ GlyA+ . A small population of cells may mature further in these cultures into CD71-/loGlyA+ normoblasts and reticulocytes. 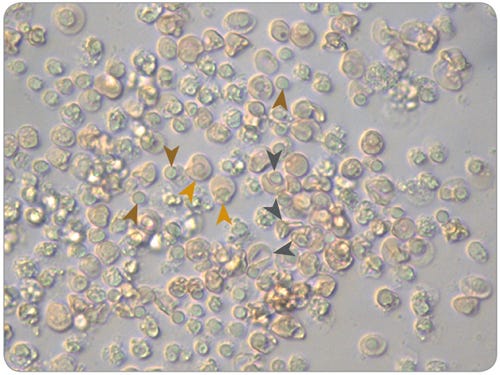 The Erythroid Progenitor Reprogramming Kit (Catalog #05924) is an integrated set of tools and reagents to enrich, expand and reprogram erythroid progenitor cells from as little as 10 mL of PB.