Dr. Jason Spence describes his work on developing organoid systems to investigate tissue development and the physiology of immature tissues 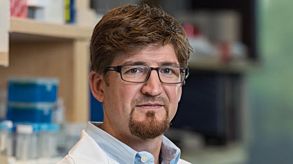