Cytokines can stimulate or suppress proliferation, differentiation, cell death, and cell migration, and have other effects through many signaling pathways. Many of these depend on the target cell and its environment, culture conditions, cofactors, or other synergistic effects. The range of potential effects of a single cytokine cannot be represented using a single numeric value. The biological activity of a cytokine is therefore measured by its effect (e.g. stimulation of cell proliferation) on a defined cell type, under standardized conditions.

In order to measure the specific (biological) activity of cytokines, cells are commonly seeded on multiwell plates and incubated with a dilution series of the cytokine. After a predefined incubation period, cell proliferation or cell death is measured by a colorimetric assay and the EC50 (half-maximal effective concentration—the concentration that induces a response halfway between the baseline and maximum response in the specified assay) is calculated. The EC50 is determined by identifying the half-maximal response on the activity curve and interpolating the cytokine concentration.

For example, the graph below is used to determine the specific activity of Human Recombinant IL-2 (Catalog #78036). CTLL-2 cells were seeded in a 96-well plate and treated with varying concentrations of Human Recombinant IL-2. Cell proliferation was measured using a colorimetric assay. In the graph below, the specific activity was determined to be ≥ 5 x 105 units/mg (EC50 ≤ 2 ng/mL). 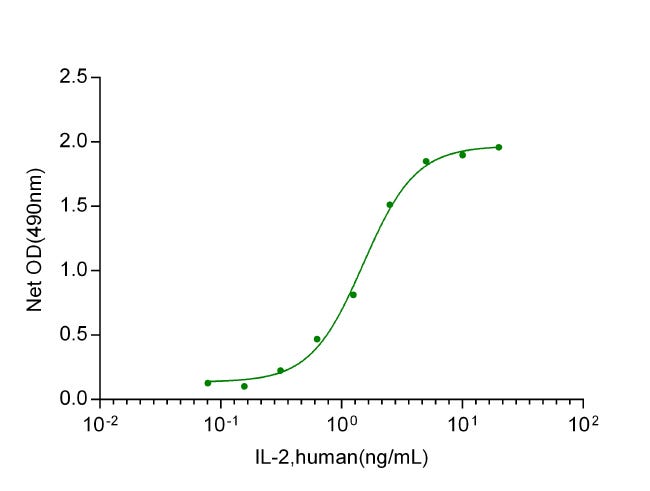 The following is an example of the conversion of EC50 into units of specific activity:
By definition, one unit of activity is the amount of cytokine that has 50% of the maximal proliferative effect per milliliter.

Specific Activity (units/mg) is calculated as:

International Units are calculated using a validated assay where the cytokine is tested side-by-side with an internal standard set by the World Health Organization (WHO). The activity of that cytokine is then normalized to the activity level of the standard. The WHO-defined standard can be obtained from the National Institute for Biological Standards and Control (NIBSC). It is important to note that the specific activity (units/mg) is not the same as IU. Specific tests need to be done against a WHO standard to obtain the equivalent IU.

The specific activity provided on the Product Information Sheet (PIS) is specific to the assay described therein, on one defined cell line under STEMCELL’s standard conditions. Thus, while the specific activity is a good demonstration of the basic functionality of the product, it does not mean that this value translates 1:1 to every application. STEMCELL advises all customers to use the given activity as a general benchmark, but to perform an additional assay adjusted for their specific application when needed. The activity of select STEMCELL Technologies cytokines is normalized using the defined standard obtained from the NIBSC and is given in IU/mg. STEMCELL is working toward providing IU data for all cytokines where such a standard exists. As with any biological assay where a living organism is the "measuring instrument", these cell proliferation assays are prone to a certain amount of statistical variance. Viability and activity of the cells after thawing, quality of the cell culture medium and serum, temperature, and incubation times are defined but will always differ to a small degree.

View a list of all STEMCELL cytokines for which IU conversion data is available.

Explore all STEMCELL cytokines and request a sample for your lab. 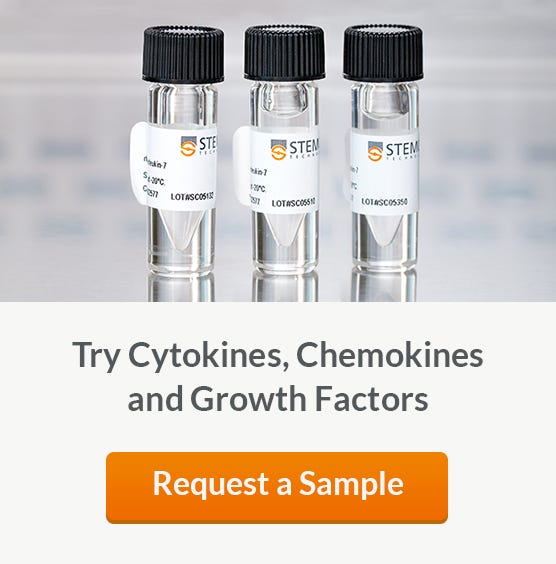