There are three main culture methods employed for directed differentiation: (1) co-culture with stromal cells or with conditioned media from stromal cell culture; (2) formation of embryoid bodies (EBs); and (3) adherent cell culture on extracellular-derived matrices. Co-culture methods involve the use of a uniquely supportive and inductive stromal cell type, which may or may not be derived from the target lineage, upon which the PSCs are placed or from which conditioned medium is extracted for later culture of PSCs. For example, hematopoietic differentiation can be induced by co-culture with M2-10B4 2 or OP93 stromal cells or by culture with conditioned medium from HepG2 stromal cells.4 This method is often quite efficient, but because unknown factors are secreted by the stromal cells, the mechanism of induction is poorly understood. EB-based differentiation involves removing hPSCs from adherent culture and placing them into non-adherent culture vessels, where they form spherical EBs and differentiate to a variety of lineages when subsequently plated onto a surface, such as gelatin. Lastly, emerging new protocols avoid EB formation, and instead keep the cells in adherent cell culture on extracellular-derived proteins or matrices. This method is therefore simpler to perform and can potentially be automated. At present, the EB-based and adherent cell-based methods both enable directed differentiation to a lineage of choice through the addition of specifi c factors. They are thus more amenable to experimental manipulation than stromal cell-based methods.

The factors used to induce differentiation to a given lineage have largely been identifi ed by studying the processes controlling normal embryogenesis,5 or by screening large numbers of molecules for their effect on lineage induction.6 As with embryogenesis, the factors need to be added in specific sequence, timing, and concentration, in order to induce fi rst the germ layer and then the specific lineage(s). For example, factors such as bone morphogenetic protein-4 (BMP-4) and Activin A might be added for 1 – 4 days, to induce hPSCs to the mesodermal germ layer;7-9 followed by a different combination of factors to induce those mesodermal cells to the cardiomyocyte8,10-12 or hematopoietic13,14 lineages. Similarly, defi nitive endoderm and subsequent pancreatic cell differentiation can be induced with a series of cytokine combinations including Activin A, FGF-10, cyclopamine, and retinoic acid.15,16 For each lineage, a growing list of factors have been shown to improve the efficiency of directed differentiation. 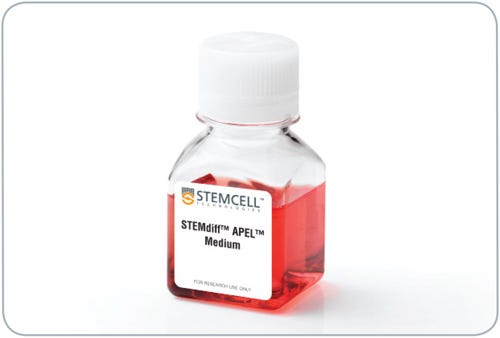 For more details on the protocols used in these examples, contact STEMCELL Technologies Inc.’s Technical Support team at techsupport@stemcell.com.

This protocol is based on Ng et al. 7 and Chadwick et al.,13 with the following changes: (1) STEMdiff ™ APEL ™ Medium was substituted for DMEM with 20% FBS as a basal medium; (2) cells were maintained prior to differentiation for at least 10 passages in mTeSR ™1 Maintenance Medium and Matrigel ™; (3) the entire differentiation procedure was performed in adherent cell culture, on a Matrigel ™coated surface instead of an EB-based method. Briefl y, hPSCs were passaged as clumps using dispase, onto Matrigel ™-coated 6-well plates in mTeSR ™1. Two days after passaging (Day 0), mTeSR ™1 medium was removed and replaced with 3 mL per well of STEMdiff ™ APEL ™ Medium supplemented with 30 ng/mL VEGF, 30 ng/mL BMP-4, 40 ng/mL SCF, and 50 ng/mL Activin A.7 On Day 4, this medium was removed and replaced with STEMdiff ™ APEL ™ Medium supplemented with 300 ng/mL SCF, 300 ng/mL Flt-3 ligand, 10 ng/mL IL-3, 10 ng/mL IL-6, 50 ng/mL G-CSF, 25 ng/mL BMP-4.13 On Days 7 and 10, complete media changes were done using STEMdiff ™ APEL ™ Medium and supplements as per Day 4. Finally on Day 13, cells were analyzed for hematopoietic differentiation by flow cytometry for expression of CD34 and CD45. Cells were also assayed by colony-forming unit (CFU) assay on Day 13, by plating 105 cells per dish in MethoCult ™ H4434 Classic, and counting the resultant colonies after 10 days. As shown in Figure 1, when STEMdiff ™ APEL ™ Medium was used with the published cytokine combinations in adherent cell based culture, approximately 30% of the cells expressed the hematopoietic marker CD34. Approximately 7% of the cells co-expressed CD34 and CD45, indicating the presence of hematopoietic progenitors (Figures 1A and 1B). This was further confirmed by the presence of CFUs at a frequency of approximately 1 in 1,000 cells (100 CFU colonies per 105 cells plated, Table 1). Interestingly, presumptive vascular endothelial cells, co-expressing CD34 and CD3115, 18 were also obtained by this procedure (Figure 1C). The frequencies of CD34+ cells, CD34+CD45+ cells, and CFUs shown here are in line with those in Chadwick et al.,13 and with more recent publications of hematopoietic differentiaton.14

This example demonstrates the utility of STEMdiff ™ APEL ™ Medium as a serum-free, animal component-free alternative for use in an established hematopoietic differentiation protocol.

On Day 13 of the described protocol, 1 x 105 cells were plated into MethoCult ™ Classic H4434 for CFU assay, and the resulting colonies counted 10 days later. Shown are the number of CFU (colonies) per 1 x 105 cells plated, in 5 separate experiments, using 2 different hESC or hiPSC lines.

This protocol is based on Yang et al.,8 with the following changes: (1) STEMdiff ™ APEL ™ Medium was substituted for StemPro®-34 SFM as a basal medium; (2) cells were maintained prior to differentiation for at least 10 passages in mTeSR ™1 Maintenance Medium and Matrigel ™; (3) EBs were formed in AggreWell ™400 plates, and (4) the entire procedure was carried out within the AggreWell ™400 plate.

As shown in Figure 3, up to 95% of EBs were found to be beating on Day 16. Despite this high frequency of beating, the percentage of cells that were cTnT positive varied between 0.1% and 5.8%, which may indicate that a minority of cells within each EB were true cardiomyocytes. While this is lower than the frequency of cTnT+ cells in Yang et al.,8 it demonstrates that STEMdiff ™ APEL ™ Medium can support differentiation of mTeSR ™1-grown cells into beating cardiomyocytes with high efficiency. Further optimization will be required to increase the frequency of cTnT+ cells using this protocol. This example demonstrates the utility of STEMdiff ™ APEL ™ Medium as a serum-free, animal component-free alternative for use in an established cardiomyocyte differentiation protocol.

hPSCs were differentiated into cardiomyocytes in STEMdiff ™APEL ™ Medium supplemented with cytokines as described. Shown are EBs in AggreWell ™400 plates, at Day 5 (A) or Day 13 (B) of the protocol. Transparent regions at the edges of the EBs tend to show beating. 100x magnification.

Figure 3. Differentiation of hPSCs into cardiomyocytes

STEMdiff ™ APEL ™ Medium is a serum-free, animal component-free basal medium which, when supplemented with specific cytokines, supports the directed differentiation of human PSCs. The examples shown here demonstrate its versatility for hPSC differentiation to cardiomyocyte, hematopoietic, or definitive endodermal lineages. Other lineages may be possible, with optimized combination, concentrations, and timing of addition of cytokines or small molecule inhibitors.

Optimization of the above protocols may be required, as different cell lines may respond differently to a given stimulus. The quality of the starting population is critical, and starting cultures should have little morphologically identifiable differentiated cells (less than 15%). Cytokines should be titrated due to batch variation and for their specific activity on a given cell line.