Dr. Asier Sáez-Cirión discusses his research on HIV infection, with a focus on understanding how some patients have the ability to control HIV infection

How Some Patients Can Control HIV Infection 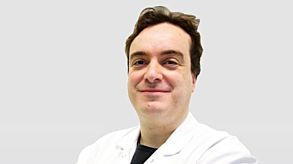 Dr. Sáez-Cirión currently leads a research team in the HIV, Inflammation and Persistence Unit at Institut Pasteur in Paris. He received his PhD in 2001 from the University of the Basque Country, Spain. He joined the Institut Pasteur as a Postdoc in 2003, and became an assistant professor in 2010. His research is focused on understanding HIV infection, particularly how some individuals have the natural ability to control HIV infection or can control their infection after interruption of antiretroviral treatment. His lab is also interested in studying factors associated with the establishment of HIV reservoirs and the immune response to HIV.

1. What motivated you to choose scientific research as your career path?

I do not recall an exact moment when I chose to be a scientist, but I remember that I was interested in science at a very young age, perhaps 6 or 7 years old. I remember telling my parents that I wanted to become a doctor – not a medical doctor taking care of patients but rather a doctor learning about disease. I saw science as an adventure to explore something that is not in plain sight. I remember collecting loyalty program points and cashing them in for a microscope. I guess you could say that I am a vocational scientist.

2. What led you to your current role at Institut Pasteur?

I was working at the FDA in Bethesda on HIV entry into cells and to design compounds that would induce neutralizing antibodies to block this entry. At the time, I was surprised that such neutralizing antibodies were found in HIV patients with very high viremia. This led me to think that there might be other people who control HIV infection and that it was worthy to try to understand the underlying mechanisms. I began looking for labs that were studying such phenomena and learned that Institut Pasteur was recruiting cohorts of patients who had been exposed to HIV but remained seronegative.

3. Tell us about your current role.

I arrived at Pasteur as a postdoc to conduct the research I described above and was lucky enough to work with people that trusted me and gave me the freedom and lab space to explore my ideas. The initial programs in which I was involved yielded some nice results and, little by little, I began coordinating larger studies. Now I have my own team within the HIV, Inflammation and Persistence Unit and I am also coordinating a large consortium called RHIVIERA (Remission of HIV Infection Era) in collaboration with ANRS. I also participate in various amfAR-funded consortiums with researchers in the United States.

1. Tell us about your lab’s research.

PTC and HIC patients represent two different examples of what HIV remission could mean in patients. Remission is a period during which the virus could still be present but is controlled by the host in the absence of treatment. In some cases, this control is so efficient that it lasts for more than 20 years. Unfortunately, this phenomenon is very rare. Our lab’s work focuses on trying to understand the mechanisms that would explain remission with the goal of being able to mimic it in other patients.

2. What are some of your team’s contributions that you would like to highlight?

In studying HIC and PTC patients, we have observed the commonality that there is an inverse relationship between the frequency of infected CD4+ T cells and the immune system’s capacity to control the infection. We have also observed that the principal anti-viral effector cells in HIC patients are CD8+ T cells with enhanced cytotoxic activity, whereas in PTC patients, NK cells may be important in maintaining HIV control.

Another important observation from our research is that the PTC status appears to be associated with starting antiretroviral treatment soon after primary infection, which leads to a rapid reduction of viral load and risk of transmission. The rapid control of viral replication will also limit the establishment of viral reservoirs, decrease the viral diversity, preserve immune responses and protect the host from the deleterious effects of chronic HIV infection.

3. What do you think is the most important advancement in the field of HIV research in the past 5 years?

The first advancement I would like to mention is the shift of the paradigm of “cure” within the HIV field. It was perceived as something impossible and mid-term remission was previously not actively pursued. We now know that remission is possible.

The second is the concept of treatment as a means of controlling the epidemic. Data shows that people whose viremia is controlled with antiviral treatment are at low risk of transmitting the virus; in an ideal world, all people infected with HIV would be under treatment to stop the transmission chain.

A more recent advancement is the use of treatment as a prophylactic tool in at risk populations. The data are quite conclusive showing that people adhering to prophylactic antiretroviral treatment greatly decrease their risk of acquiring HIV.

4. What are some of the main technical challenges facing the field?

The main technical challenge is that we are unable to identify all HIV infected cells within a patient. Once integrated into the host cell’s DNA, the virus’ genome remains latent but can be later activated, representing a viral reservoir. We are unable to identify all cells that contribute to this HIV reservoir and are therefore unable to eliminate them. Also, we have not yet identified all tissues or cells in which the virus replicates and so this does not allow complete monitoring of patients. In short, we have not identified all of the infected cells in the body.

5. What are your thoughts on these current topics:

We have improved our knowledge of the type of neutralizing antibodies that need to be induced via a vaccine approach but we have not yet identified a suitable vaccine to induce the production of these antibodies. This is currently an active field of research that will hopefully yield some suitable candidates. A very exciting example is a therapeutic CMV based vector that has been studied in a macaque model for HIV and has shown impressive clearance of the virus in half of the vaccinated animals.

b. Potential use of immunotherapy for HIV treatment?

We can definitely learn from approaches used for cancer immunotherapy (ex. CAR T cells) but most HIV patients receiving antiretroviral treatment lead normal lives and, as such, high-risk treatment approaches are not suitable or necessary.

There are different theoretical approaches that have been proposed using such techniques as CRISPR/Cas9: either removing something from the host cells that is necessary for the HIV virus but not necessary for the host cells or excising the integrated virus genome from the host cell genome. The question is how efficient these methods would be and whether the virus might also develop resistance against these biological scissors. The major obstacle is that we currently cannot identify the entire HIV reservoir, even with very sensitive techniques.

1. Why does your lab use RoboSep™?

The RoboSep™ is perfect for our L3 facility: complete automation for cell isolation and little maintenance and contact of the system with infectious material.

We use RoboSep™ to isolate different cell subsets (monocytes, CD4+ T cells, CD8+ T cells, and NK cells) from HIV infected patients and use these cells to perform genetic and/or functional analyses. For instance, we isolate CD4+ T cells from different patients and check the susceptibility of these cells to HIV infection. By doing so, we can detect resistance of host cells to infection with the hopes of elucidating the mechanisms that contribute to limiting the HIV reservoir. We also infect CD4+ T cells in vitro and cocultured them with autologous CD8+ T cells or NK cells to assess the antiviral capacity of these later cell types.

2. How does RoboSep™ help your research?

It is a time saver for the people working in the lab. The time the RoboSep™ is separating the samples can be employed in pursuing other experiments

On control of HIV infection

Most individuals infected with HIV-1 develop AIDS; however, less than 1% of infected individuals have the natural ability to resist disease progression and maintain undetectable viremia without any therapeutic intervention1. Perhaps just as remarkable, some individuals are able to control their HIV infection for several years after interruption of their antiretroviral therapy2. In order to design new and improved HIV therapy, researchers have been actively investigating the mechanisms underlying control of HIV infection in these natural HIV controllers and post-treatment controllers.

Scientists have discovered that immunity plays a crucial role in the control of HIV infection. Notably, the control of HIV infection is strongly associated with high frequencies of HIV-specific CD8+ T cells that can potently suppress HIV infection by eliminating infected cells3,4,5. Asier’s group have further discovered that monocyte-derived dendritic cells from HIV controllers have low susceptibility to HIV-1 infection but have high capacity to capture HIV-1 particles6, suggesting their heightened capability to present HIV-specific antigens in order to stimulate CD8+ T cell responses. Researchers are actively investigating ways to translate these findings towards the improvement of HIV therapy in the clinic.

HIV primarily infects CD4+ T cells via their receptor, CD4, along with chemokine receptors CXCR4 and CCR57. Despite effective antiretroviral therapy, HIV-1 provirus can remain latently integrated in infected host CD4+ T cells for a prolonged time, resulting in a persistent viral reservoir8. Researchers are currently investigating approaches to eliminate latently infected cells or remove integrated proviral DNA from infected cells. For example, Li et al suggests that activation of retinoic acid-inducible gene I (RIG-I) pathway using acitretin, a drug currently used for the treatment of psoriasis, can promote the apoptosis of HIV-infected cells and minimize HIV reservoir9. In another study, Karpinski et al developed a recombinase, Brec1, that can site-specifically recognize and remove proviral DNA from infected cells in vitro and in vivo in humanized mice10. Despite these discoveries, one of the major challenges remains the inability to identify all host cells that are latently infected by HIV, as Asier mentioned above. This challenging task hinders scientists from knowing the true size of the reservoir and how to eliminate it11.

Learn more about the Immune Response to HIV.