Recent advances in isolating epithelial progenitor cells and stromal cells, as well as defining niche factors important for lung development, have led to the establishment of an in vitro 3D lung culture system: pulmonary (lung) organoids.

Below is a collection of resources to support your pulmonary research.

Traditional two-dimensional (2D) cell culture models have had a profound impact on both basic and clinical research in the pulmonary field.1 However, the inherent differences when compared with in vivo and clinical observations pose an impediment to answering research questions. Recent progress isolating lung epithelial progenitor and stromal cells, as well as defining stem cell niche factors that are important for lung development, has led to the establishment of an in vitro three-dimensional (3D) culture system: lung organoids2, also known as airway organoids or pulmonary organoids.

The lung organoid is essentially a 3D tissue-engineered mini lung that accurately replicates the histological and functional aspects of the in vivo tissue. By developing these structures and functions, the organoid emulates the in vivo physiological or pathological environment. It often has multiple types of cells mirroring their counterpart in the body along with constituents of native extracellular matrix (ECM) and is typically miniature or micro-scale in size. Such cultures are seen as an important avenue to reconstitute organ function ex vivo.1

Lung Epithelium and Its Region-Specific Progenitors

The lung is a complex organ composed of many types of epithelial cells, immune cells, endothelial cells and stromal cells. It can be divided into the conducting zone and the respiratory zone. The conducting zone includes regions that do not participate in gas exchange, namely the nasal passage, trachea, main bronchi, intra-pulmonary bronchi and bronchioles. The respiratory zone consists of respiratory bronchioles, alveolar ducts and alveolar sacs, and is the site of gas exchange between the air within the lung and the blood within pulmonary capillaries. The human airway, from the nasal passage to the alveolar sacs, is covered with a continuous epithelial sheet that differs in morphology and cellular composition between the conducting and respiratory zones. In the most proximal regions of the conducting zone, including the nasal passage, trachea, and bronchi, the airway epithelium exhibits a columnar, pseudostratified morphology. The height of this epithelium decreases in more distal regions of the conducting zone and resembles a cuboidal epithelium in the small airway. The major cell types of the large airway epithelium are goblet cells that produce and secrete mucus, ciliated cells that promote mucus motility through coordinated movement of their apical cilia, and basal cells that line the basement membrane and do not contact the apical surface of the epithelium. In the bronchioles, the cuboidal epithelium contains secretory club cells and fewer ciliated cells than in more proximal airway regions. The alveolar epithelium is lined with type I and II alveolar epithelial cells (AECs). The alveolar cells fuse to endothelial cells by their basal membranes to form the gas exchange barrier.3–5

The airway epithelium is a dynamic tissue that normally undergoes slow but constant turnover of less than 1% per day.6–8 In the event of mild to moderate injury, the airway epithelium responds vigorously to re-establish an epithelial sheet with normal structure and function. This repair process is carried out by the airway stem and progenitor cells. Evidence suggests that different kinds of epithelial stem and progenitor cells reside in different regions of the lung: basal cells in the proximal trachea and bronchi,9 club cells in the small bronchi, bronchioalveolar stem cells (BASCs) in the bronchial-alveolar duct junction (BADJ),10 and alveolar type II epithelial cells in the alveolar region.11,12

Wallchart: Cellular Organization and Biology of the Respiratory System

Get an overview of the different parts of the respiratory system, associated respiratory diseases, and airway cell culture model systems.

To appropriately model the in vivo human lung, specialized in vitro cell culture techniques have been developed that promote the formation of 3D structures recapitulating the morphological and functional characteristics of the airway. Special culture techniques are required for stem and progenitor cells isolated from different regions of the lung. For example, basal cells from the proximal human airway, upon recapitulation in organotypic air liquid-interface (ALI) culture, differentiate into a mucociliary pseudostratified epithelium containing ciliated, goblet and basal cells. In this in vitro cell culture environment, cells display beating cilia, mucus secretion, barrier properties, as well as remodeling and restoration properties similar to the native airway epithelium. This ALI culture is the most well-characterized model in the in vitro lung modeling field.13–15 In this method, the human bronchial epithelial cells obtained from bronchial brushings, or through isolation of epithelial cells from cadaveric donor tissue, can be seeded on permeable inserts. The procedure for inducing cell differentiation first requires growth of the cells in submerged cultures on inserts until they become fully confluent. Next, medium is removed from the apical surface and cultures are grown in ALI conditions and cultured until they have become fully differentiated, a process that takes 21 - 28 days. Once ‘air-lifted’, ALI cultures are fed with medium bathing the basolateral cell surface only. The combination of apical exposure to air and basal exposure to specialized cell culture medium triggers differentiation of the monolayer culture to a pseudostratified columnar epithelium that resembles the native human airway.

The ALI culture model system is useful in a number of applications ranging from in vivo inhalation toxicology and drug screening to basic research. To learn how researchers are also using ALI cultures to study respiratory viral infections, including COVID-19, explore these resources. The advantages of this model over in vivo animal studies include the use of human tissue, a relatively low cost of maintenance and ease of handling. The use of ALI cultures also offers a unique opportunity for the direct deposition of aerosol particles onto semi-dry apical cell surfaces, a procedure that mimics the deposition of powders onto the airway surface.16–18 The drawback of ALI culture is its limitation for use in high throughput scales. Additionally, even though this ALI culture works well for proximal airway, it doesn’t work for distal airway, likely due to a higher complexity of the alveolar stem cell niche and the requirement of stromal cell support for the alveolar structure. Moreover, epithelial cells grown in ALI culture are not passageable.

Recent progress in isolating epithelial progenitor cells and stromal cells, and defining niche factors important for lung development, has led to the establishment of an in vitro 3D lung culture system: lung organoids.12,19 In lung organoid cultures, epithelial stem and progenitor cells are cultured in ECM supplemented with either a mixture of growth factors or stromal cells. The organoids then self-organize into complex structures retaining clusters of multi-lineage epithelial cells. Lung organoids recapitulate various features of the lung including heterogeneous cell composition, spatial organization, and retention of a stem cell population harboring the capacity to both self-renew and differentiate. In lung organoid culture, isolated airway epithelial cells can be grown as 3D spheres in semi-solid Matrigel® ECM with or without the use of tissue culture inserts. Individual cells are able to grow into clonal spheres called bronchospheres, bronchioalveolar spheres or alveolospheres, depending on the origin of the starting cells. While bronchospheres can be formed in specialized matrices and medium without co-culture with other tissues,9,20 bronchioalveolar spheres and alveolospheres can currently only be formed in co-culture with other cell types, such as fibroblasts or endothelial cells, thus requiring a more advanced culture system, called organoid co-culture.12,19 Recently, several groups demonstrated that the lung organoids can be generated from human pluripotent stem cells following a stepwise directed differentiation.21–23 The advantages of the lung organoid co-culture are propagation ability, amenability for high throughput screening, and feasibility of establishing a distal lung model.

Find optimized media for modeling the human airway in vitro as ALI cultures or airway organoids.

The most attractive advantages of lung organoid cultures is that they allow for the expansion of lung stem cell populations and the induction of differentiated cells from very limited amounts of starting material. In addition, it provides a more physiologically relevant culture system, particularly for the distal lung. These special characteristics make organoid culture an excellent culture system for a wide range of applications in both basic and translational approaches such as drug screening, disease modeling and genetic screening.

Organoids derived from adult stem and progenitor cells reliably retain their in vivo regenerative activity in vitro, and thus provide detailed snapshots of tissue restoration after injury. Lung organoids allow researchers to study processes governing homeostatic regulation of lung tissue and screen factors that impact lineage-specification of stem cells. Most importantly, lung organoid co-culture can be used to study the interaction and crosstalk between stem cells and their niche. Whereas our capacity to initiate specific alteration either of stromal cells or ECM composition in vivo is limited, organoid co-cultures make it possible to precisely manipulate the components of the microenvironment in order to further determine their functional roles in modulating lung stem cells.19,20,24–26 In addition, many lines of evidence have emerged for a complex coordination between epithelial and immune cells during repair and the regeneration process after lung damage. Utilising the co-culture system, cellular and molecular effectors of immune cells in stem cell regulation can be determined.27

Pre-clinical models of human disease are essential for the basic understanding of disease pathology and its translational application into efficient treatment for patients. Patient-derived organoid cultures from biopsies and/or surgical resections present a novel improvement to this end and disease modeling will likely be a primary focus of future organoid studies. Two examples are lung cancer and cystic fibrosis.28 Adult primary epithelial cell-derived organoids combined with CRISPR-Cas9-mediated genetic engineering technology may allow conversion of normal organoids into their respective malignancies in vitro by adding a combination of cancerous mutations in a sequential manner.29,30 This system is not only able to recapitulate human lung cancer but also to further assess responses to combination drug therapy. Recently, patient-derived organoids from human lung cancer biopsies have been established and have enabled the analysis of resistance mechanisms for targeted therapies in individual patients.31 The ability to rapidly generate organoids from individual patients also enables biobanking, testing of chemotherapies for personalized medicine development and targeted therapies.

Read a complete overview of organoid technologies and their applications.

Using lung organoids, we can investigate the function of lung stem cells residing in distinct regions of lung tissue while also monitoring their behaviour in different micro-environments. Although lung organoid culture systems are still in their infancy, it is becoming possible to extend their use to biomedical applications such as disease modelling and treatment. Generation of patient-derived organoids from biopsies provide a powerful resource for a wide range of translational and medical approaches, such as drug toxicity and efficacy studies. Some issues for the current lung organoid culture technique are still unresolved, such as culture conditions to better maintain genetic stability and physiological function over time and development of organoid high-throughput screening platforms. Addressing these technical difficulties will advance the technology rapidly toward pre-clinical and clinical applications. 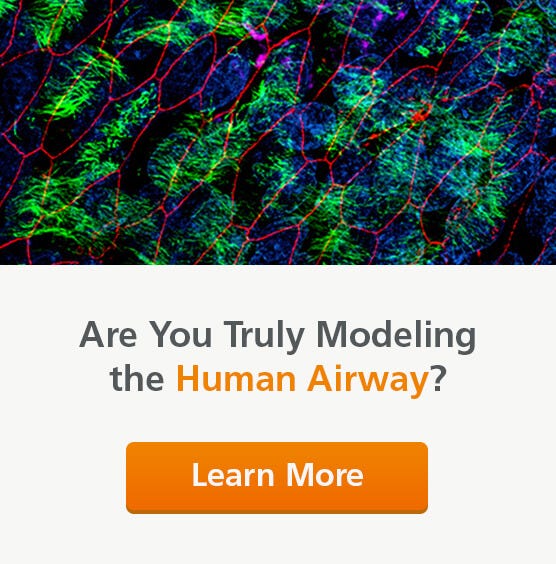 Stay up to date on the latest publications by subscribing to Organoid News and Pulmonary Cell News.