The EasySep™ Human CD14 Positive Selection Kit II is designed to isolate highly purified CD14+ cells from fresh or previously frozen human peripheral blood mononuclear cells (PBMCs). Desired cells are targeted with Tetrameric Antibody Complexes recognizing CD14 and dextran-coated magnetic particles. Labeled cells are separated using an EasySep™ magnet without the use of columns. Cells of interest remain in the tube while unwanted cells are poured off. The CD14 antigen is strongly expressed on monocytes and macrophages and weakly on granulocytes. It is also expressed on most tissue macrophages.

1:13
The EasySep™ Pour-off: A Simple and Effective Way to Isolate Cells 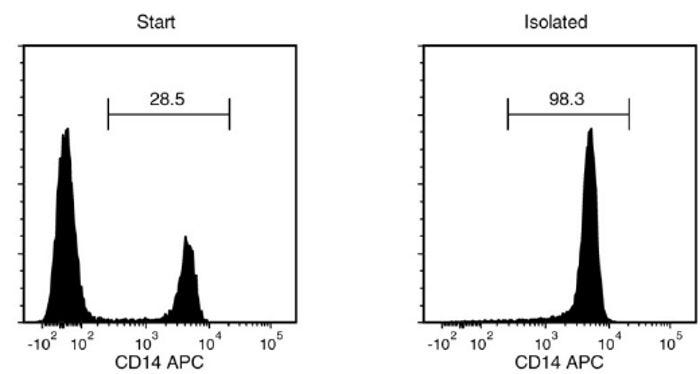 Starting with a single cell suspension of human PBMCs, the CD14+ cell content of the isolated fraction is typically 95.3 ± 4.5% (mean ± SD using the purple EasySep™ Magnet).

(15)
The Journal of experimental medicine 2019 may

Subclinical hypothyroidism is associated with cardiovascular diseases, yet the underlying mechanism remains largely unknown. Herein, in a common population (n = 1,103), TSH level was found to be independently correlated with both carotid plaque prevalence and intima-media thickness. Consistently, TSH receptor ablation in ApoE-/- mice attenuated atherogenesis, accompanied by decreased vascular inflammation and macrophage burden in atherosclerotic plaques. These results were also observed in myeloid-specific Tshr-deficient ApoE-/- mice, which indicated macrophages to be a critical target of the proinflammatory and atherogenic effects of TSH. In vitro experiments further revealed that TSH activated MAPKs (ERK1/2, p38alpha, and JNK) and IkappaB/p65 pathways in macrophages and increased inflammatory cytokine production and their recruitment of monocytes. Thus, the present study has elucidated the new mechanisms by which TSH, as an independent risk factor of atherosclerosis, aggravates vascular inflammation and contributes to atherogenesis.
Science advances 2019 jan

Specialized immune cell subsets are involved in autoimmune disease, cancer immunity, and infectious disease through a diverse range of functions mediated by overlapping pathways and signals. However, subset-specific responses may not be detectable in analyses of whole blood samples, and no efficient approach for profiling cell subsets at high throughput from small samples is available. We present a low-input microfluidic system for sorting immune cells into subsets and profiling their gene expression. We validate the system's technical performance against standard subset isolation and library construction protocols and demonstrate the importance of subset-specific profiling through in vitro stimulation experiments. We show the ability of this integrated platform to identify subset-specific disease signatures by profiling four immune cell subsets in blood from patients with systemic lupus erythematosus (SLE) and matched control subjects. The platform has the potential to make multiplexed subset-specific analysis routine in many research laboratories and clinical settings.
Nature microbiology 2019 feb

Exposure to Mycobacterium tuberculosis (Mtb) results in heterogeneous clinical outcomes including primary progressive tuberculosis and latent Mtb infection (LTBI). Mtb infection is identified using the tuberculin skin test and interferon-gamma (IFN-gamma) release assay IGRA, and a positive result may prompt chemoprophylaxis to prevent progression to tuberculosis. In the present study, we report on a cohort of Ugandan individuals who were household contacts of patients with TB. These individuals were highly exposed to Mtb but tested negative disease by IFN-gamma release assay and tuberculin skin test, 'resisting' development of classic LTBI. We show that 'resisters' possess IgM, class-switched IgG antibody responses and non-IFN-gamma T cell responses to the Mtb-specific proteins ESAT6 and CFP10, immunologic evidence of exposure to Mtb. Compared to subjects with classic LTBI, 'resisters' display enhanced antibody avidity and distinct Mtb-specific IgG Fc profiles. These data reveal a distinctive adaptive immune profile among Mtb-exposed subjects, supporting an expanded definition of the host response to Mtb exposure, with implications for public health and the design of clinical trials.
Scientific reports 2018 OCT

Tolerogenic dendritic cell (tolDC)-based therapies have become a promising approach for the treatment of autoimmune diseases by their potential ability to restore immune tolerance in an antigen-specific manner. However, the broad variety of protocols used to generate tolDC in vitro and their functional and phenotypical heterogeneity are evidencing the need to find robust biomarkers as a key point towards their translation into the clinic, as well as better understanding the mechanisms involved in the induction of immune tolerance. With that aim, in this study we have compared the transcriptomic profile of tolDC induced with either vitamin D3 (vitD3-tolDC), dexamethasone (dexa-tolDC) or rapamycin (rapa-tolDC) through a microarray analysis in 5 healthy donors. The results evidenced that common differentially expressed genes could not be found for the three different tolDC protocols. However, individually, CYP24A1, MUCL1 and MAP7 for vitD3-tolDC; CD163, CCL18, C1QB and C1QC for dexa-tolDC; and CNGA1 and CYP7B1 for rapa-tolDC, constituted good candidate biomarkers for each respective cellular product. In addition, a further gene set enrichment analysis of the data revealed that dexa-tolDC and vitD3-tolDC share several immune regulatory and anti-inflammatory pathways, while rapa-tolDC seem to be playing a totally different role towards tolerance induction through a strong immunosuppression of their cellular processes.
STEMCELL TECHNOLOGIES INC.’S QUALITY MANAGEMENT SYSTEM IS CERTIFIED TO ISO 13485. PRODUCTS ARE FOR RESEARCH USE ONLY AND NOT INTENDED FOR HUMAN OR ANIMAL DIAGNOSTIC OR THERAPEUTIC USES UNLESS OTHERWISE STATED.
Internal Search Keywords: 17858|17858RF|17858C|18058|18058RF|18058C.1|17818|18018|14758|14758C