For detection and measurement of human immunoglobulin E

The Human Immunoglobulin E (IgE) ELISA Kit is designed for the quantitative detection and measurement of human IgE in biological fluids such as serum, plasma, and cell culture supernatants. IgE is predominantly found in the lungs, skin, and mucous membranes and is the least common immunoglobulin in serum. IgE plays a fundamental role in allergic reactions by stimulating degranulation of eosinophils, mast cells, and basophils through interaction with the Fc epsilon Receptor I (FcεRI). 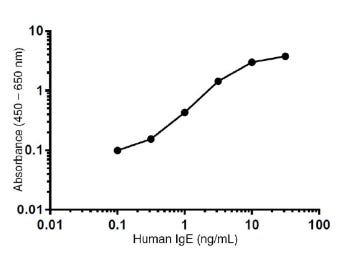 • Reportable Range: 0.1 - 32 ng/mL. This is the concentration range in which measurement of the analyte can be done with the highest precision, accuracy, and linearity.
• Sensitivity: The limit of detection of this assay is 0.069 ng/mL. This is the analyte concentration with absorbance two standard deviations higher than the zero standard.
• Accuracy: The analyte standard of this ELISA was calibrated against NIBSC international standard 75/502.
• Recovery: A mid-curve recovery of 80 - 86% was determined by spiking defined amounts of analyte standard into serum or plasma samples in repeated experiments.
• Precision: The intra-assay precision of this assay is 2.8% (CV). The inter-assay precision of this assay is 5.5% (CV). 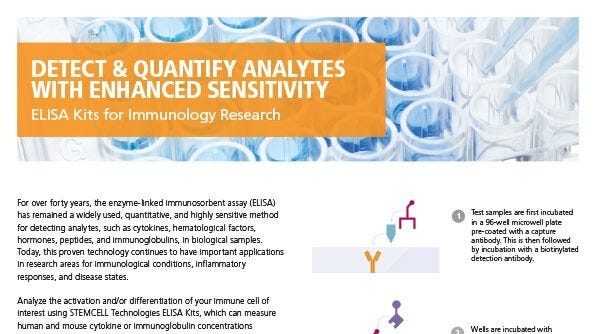